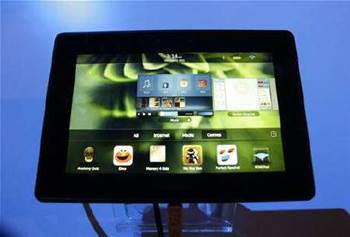 Inside the company's life-or-death battle for relevance.

Once upon a time, BlackBerry was king. Then came the iPhone, followed by Android. And BlackBerry seemingly lost its way -- if not quite its throne.

Research In Motion is holding on to profit growth and impressive margins. For all the consumer appeal of Apple products, BlackBerry is still dominant in corporate mobile communications and RIM sells millions of its workaholic devices each quarter to a growing global audience.

But the attention of investors, analysts and developers is drifting elsewhere and the Canadian company, in the midst of a major platform and product transition, is seen possessing but a small window of opportunity to reinvigorate itself and match the momentum of rival mobile monarchs Apple and Google.

The PlayBook tablet computer, due to launch within weeks after a six-month pitch, is RIM's first product to use an industrial-strength operating system based on QNX, a powerhouse microkernel (rather than the typical monolithic kernel) which RIM bought last year and aims to incorporate into its future smartphones.

QNX -- which also runs nuclear power plants, medical instrumentation and Cisco's core Internet routers -- is the brains behind many of the infotainment systems shipping in new cars, and RIM plans seamless interaction between those dashboards, its PlayBook and its range of BlackBerry smartphones.

The PlayBook is a multitasking behemoth in a petite package, able to stream a high-definition video to a television screen via a HDMI cable while a user simultaneously edits a presentation or plays an immersive game on the 7-inch device.

It is also a minor revolution for a myopic company that has long been intolerant of risk, insiders say.

"The Playbook shows that RIM has lost some of its collective fear, but only because it's a proven moneymaker for other companies who have already blazed a path for RIM to take," said one former RIM software engineer.

Those who know him best say Mike Lazaridis, the engineer founder of Research In Motion, never believed a tablet computer was the right fit for the BlackBerry maker.

"Mike is a purist. He sticks to his main theme," said Robert Fraser, an early wireless pioneer and RIM partner whose concept of a personal communicator was eventually embodied by the BlackBerry. "One of the reasons RIM has been so successful is because they haven't deviated."

That theme was wireless email, sent via a server network that compresses and encrypts messages and guarantees delivery, vital for business in a world of limited radio resources.

Part of RIM's solution, the BlackBerry Enterprise Server, sits behind a corporate firewall and ties closely to proprietary back-end systems. The whole operation is managed by massive data centers run by RIM, which also enable the free BlackBerry Messenger service so beloved by teenagers.

RIM's BlackBerry service, launched in 1999, was an immediate hit with white-collar workers and politicians, and today there are more than 250,000 of its enterprise servers installed worldwide.

That overwhelming success, however, coupled with a lawsuit that almost shut the whole operation down, bred intense caution that could ultimately threaten the company's future as it shies away from betting on risky innovations.

As far back as 2005, when it became feasible to display a browser on a wireless device, Fraser was pushing his friend Lazaridis to branch out to a larger screen, to no avail.

Yet a year after Apple's iPad captured imaginations and made the long-possible tablet computer a market reality, RIM is about to follow suit, with its smaller, more business-friendly version, the PlayBook.

"Something changed his mind in the last two years," Fraser said. If it was the iPad's runaway success that forced RIM's hand, Lazaridis ain't admitting it.

In several interviews with Reuters in recent months, executives including Lazaridis and his salesman co-chief Jim Balsillie have painted the PlayBook as a gilded object blessed with perfect timing and pedigree.

"For me, it's all about mobile computing and always was. And it's about always choosing the right moment, the right time, the right technology," Lazaridis said.

That's why RIM took the painful decision to delay the project to ensure it packed Texas Instruments' dual-core processor at launch, which is expected within weeks.

"We decided the tablet market was still in its infancy, it hasn't really taken off yet," Lazaridis said, dismissing the headstart of Apple, which pocketed US$9.5 billion from sales of almost 15 million iPads in 2010, three times most initial forecasts, and this month unveiled an updated version.

It may be in its infancy, still dwarfed by both smartphone and laptop sales, but it is growing fast and a verdict on the viability of PlayBook and its QNX centerpiece is expected by year-end.

"Let's not make any bones about it, they're trying to fulfill this transition during an incredibly hectic time and one where they're seeing a huge amount of competition externally," said Geoff Blaber, an analyst at CCS Insight.

"It gives them the framework, it gives them the opportunity to compete," he said in reference to QNX. "What is uncertain now ... is how they're going to deliver that beyond the tablet."

Then he adds a hedge: "History has taught us to be very careful of writing RIM off. By the end of this year I'd expect to see a pretty big change in terms of what they're offering."

Read on to page two for RIM's life-or-death battle for relevance.