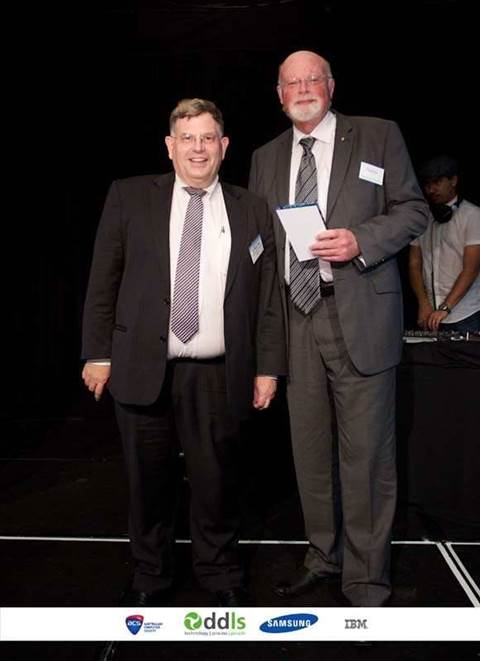 Defence CIO Greg Farr has been named Government CIO of the Year at the Benchmark Awards, held this evening at Melbourne's Grand Hyatt.

Farr, who was replaced by new Defence CIO Peter Lawrence in late 2012, served a five year contract as Defence CIO after a long stint at the Australian Tax Office.

At Defence, Farr presided over a plan to cut $1.9 billion from the agency's costs, with a range of initiatives that included a reduction in contracts and suppliers, embracing shared services, the impending rollout of a next generation desktop and data centre consolidation.

It was the latter project that was considered in isolation for Defence's submission to the iTnews Benchmark Awards. Defence is consolidating some 280 computer rooms down to 10 key facilities and has completed the decommissioning of its main data centre in Canberra.

"The data migration was a project 18 months in the making, and it was both well managed and horribly complex [to get] from where we were to where we are," Farr said.

Farr's nomination — submitted by his colleagues at Defence — described him as "understated" but authorative, an "extraordinary individual and a highly successful chief information officer."

Farr inherited an IT organisation in 2007 that suffered from "systemic problems with service delivery, a lack of architectural intent, an unacceptable level of unreliable legacy devices and applications still in service, ongoing failure to deliver on high profile projects and no credible plan for fixing the problems and modernising Defence’s ICT," Defence acknowledged in its nomination.

Farr's first port of call was to survey users on their top IT bugbears, using this feedback as the basis of a five year improvement program.

Under Farr's tenure, the CIO was offered a seat on the Defence Committee, the highest decision-making body within the agency. From there he could personally consult Service Chiefs on their needs.

He established what is now known as the 'Integrated Program of Work', a strategic IT plan signed off by the Defence Secretary and Chief of the Defence Force to ensure IT aligns with wider organisational goals.

Carmel McGregor, Deputy Secretary for the Defence People Group remarked that Farr contributed "pearls of wisdom and a voice of sanity" to conversations among the Defence Senior Executive.

This enabled Farr to argue for supplementary funding for IT projects — at one stage a cool half a billion dollars over five years — to ensure projects could be completed.

In his last interview with iTnews, Farr said he wasn't ready to retire from the ranks of IT management altogether.