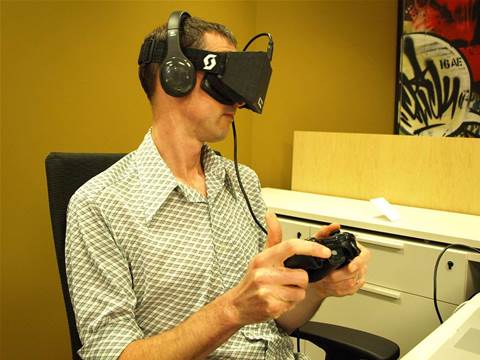 Facebook will acquire virtual reality headset maker Oculus VR for US$2 billion (A$2.1 billion), buying its way into the fast-growing wearable devices arena with its first-ever hardware deal.

The acquisition, which comes hot on the heels of its US$19 billion deal for messaging service WhatsApp, is a bet on virtual-reality technology, which Facebook said is a strong candidate to emerge as the next social and communications platform.

"Mobile is the platform of today, and now we're also getting ready for the platforms of tomorrow," said Facebook founder and CEO Mark Zuckerberg. "Oculus has the chance to create the most social platform ever, and change the way we work, play and communicate."

Startup Oculus VR raised US$75 million in December in a round led by Andreessen Horowitz to market its virtual-reality headset for video games and develop the product for use in areas like education, film, architecture and design.

Oculus plans to produce commercial versions of its virtual reality glasses, called Oculus Rift, which users mount on their heads with a strap. It also hopes to take its technology beyond gaming.

Facebook ended 2013 with US$11.45 billion in cash and marketable securities. The company's US$19 billion acquisition of WhatsApp includes US$4 billion in cash.

The Oculus deal comprises US$400 million in cash and 23.1 million shares of Facebook common stock.

The transaction is expected to close in the second quarter.