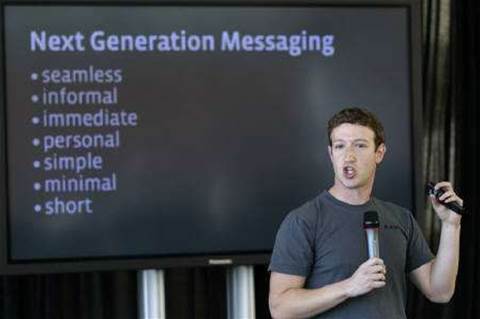 Facebook has rolled out an all-in-one messaging service that for the first time allows its half-billion members to communicate with people outside the social network, intensifying a battle with Google and Yahoo for users' Internet time.

The new feature -- to be rolled out over coming months -- lets users send and receive instant and text messages in addition to standard email and Facebook notes.

"This is not an email killer. This is a messaging system that includes email as one part of it," Zuckerberg told reporters at the St. Regis hotel in San Francisco.

Zuckerberg, who said more than 350 million of Facebook's half-billion users now actively send and receive messages on his website, did not expect people to stop using traditional email tomorrow.

But he hoped more and more will shift to an integrated, cross-platform mode of communications over the longer term, such as the service he debuted Monday.

Analysts say that email users are particularly valuable to Web portals like Yahoo, which seek to funnel the traffic into their other online services.

Facebook and Google's intensifying rivalry is expected to play a crucial role in shaping the future of the Internet. The industry is closely watching their pitched struggle for Web surfers' time online, advertising dollars, and increasingly costly Silicon Valley talent.

Its new product will automatically route messages from a person's most frequently-contacted acquaintances into a main inbox, with messages from other contacts pooled in a separate inbox.

It also does away with some traditional email customs, such as the "subject" line. Instead, all the messages between two people are threaded together into one long-running conversation.

Should all of Facebook's active users adopt the new service, the social network would begin to approach the number of users now on Microsoft hotmail, the most popular Internet email service.

Last week, Google began blocking Facebook from importing user contact data from its Gmail email service -- until Facebook reciprocates with its own trove of personal data.

In terms of potential privacy concerns, Zuckerberg stressed that the new service may actually be less intrusive than others'.

For instance, it would not automatically scan the contents of people's email to display ads based on similar keywords, as is done by many of today's popular Web-based email products like Gmail, he argued.

"Email is still really important to a lot of people. And we just think that this simpler kind of messaging is going to be how a lot more people shift a lot of their communications," Zuckerberg said.

Ovum analyst Eden Zoller said the service will put Google, Microsoft and Yahoo "on the defensive".

Facebook would have a compelling messaging solution if integrated with personalised content, Skype and location services, he said.

"It should also give telcos a lot to think about as Facebook is becoming an increasingly rich communication platform," he said. "All it needs to do now is put search into the equation."