Extra leap second could cause headaches for IT admins 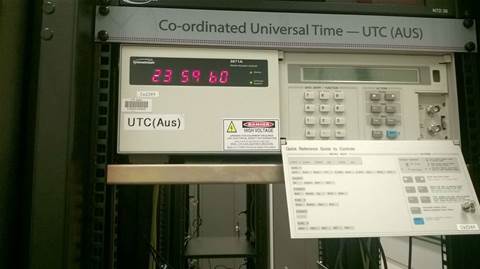 Australia's National Measurement Institute added an extra leap second to its time servers at 10am this morning, with the change likely to create some headaches for IT administrators.

The NMI's Caesium atomic reference clock provides the official time for Australia, and is fed directly through to businesses and universities around the country.

In turn, the pulse is sent to the Bureau of International Weights and Measures in Paris, with the averages from different measurement bureaus around the world used to calculate the coordinated universal time (UTC).

"One of the challenges of the leap second is making sure computer networks pick it up, but there are good tools for that," NMI general manager of physical metrology Bruce Warrington said.

"Network time protocol (NTP), as a way of exchanging time information from one system to another, has been around for a very, very long time. The challenge comes in the way it's implemented.

"If you do a full implementation of NTP, it's leap-second aware. If you use an operating system that knows about leap seconds, it should in theory be seamless," he said.

"In practice, not all operating systems and not all implementations of NTP are complete, and so what your system will do when told by an NTP server a leap second is scheduled is something you need to figure out."

Parliamentary Secretary for Industry and Science Karen Andrews said the Department of Communications was in discussions to prevent the disruption potentially caused by leap seconds falling on weekdays.

"It's quite unusual to see this done during business hours, usually it's done on January 1," Andrews said.

"It has an impact on the business world, the time clearly has implications for flights etc that are operating at that time.

"To be here on the first of July to see the clock tick over is very exciting. I'm a mechanical engineer, so I've been excited about being here for several months now."

In 2012, an outage at Qantas was blamed on a bug in the way Linux handles leap seconds.

"We have a lot of equipment here that relates to standards of measurement that needs to take ongoing measurements or monitor the quality of a system, or that talks from here to systems outside our own institute," he said.

"We have somewhat customised needs around scientific computing and we have to make sure that we keep evolving that part of our infrastructure the same way we do the rest of our technical standards around measurement systems."