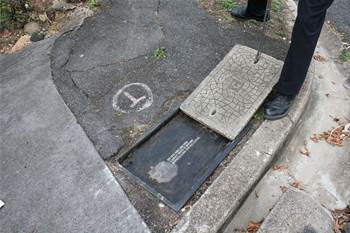 iTnews tours the first fibre-to-the-home rollout outside of the NBN.

Telstra has had to replace between ten and 15 percent of lead-in conduits to homes in south Brisbane as part of a fibre-to-the-premise rollout.

The project, sparked by the closure of the South Brisbane copper exchange to make way for a new Queensland Children's Hospital, has to date connected 300 customers since activations began last month.

It would ultimately provide some 18,000 services to 11,000 residences by end of 2012, when the rollout is expected to be complete and the copper network shut down.

Technicians conducting street works in the first two of 17 "tranches" to receive the fibre had found it necessary to dig up many lead-in conduits and upgrade pits deemed too small or too damaged to suit the new infrastructure.

However, the built-up area meant construction was actually easier than first thought.

"For a very old area we thought the construction would be a lot more difficult but it's less [so] than we thought."

Though hundreds of Telstra-owned pits would require upgrading to house fibre, Kincaid said the rollout in Queensland had proved slightly easier than thought as most homes in the area were slightly raised, making it easier for technicians to run cables and install network termination units under houses.

Many of the areas in the rollout were those most affected by floods earlier in the year.

Where individual premises would be connected to fibre through a single network termination unit, Telstra had begun installing NTUs with six fibre connections - dubbed an "egg" - to every one or two floors of apartment blocks in the fibre area.

Trouble, however, lay in reticulating the fibre to each floor, as many buildings lacked the conduits Telstra needed.

"More of the units are older and just aren't built for fibre," Kincaid said.

Technicians had spent the past four months in Highgate Hill but it had taken until May to become "good at what we were doing", according to Kincaid.

A total of 40 communications technicians were charged with the rollout, of which half would conduct street works six-to-seven weeks ahead of the fibre rollout to the premises.

Once a house was ready for connection, a technician would take between 2.5 and 7 hours to make the connection from the street to the network termination unit.

South Brisbane was the one of the first Australian brownfields areas to receive fibre outside of that to be provided under the National Broadband Network.

The network would continue to accommodate the 32 retail service providers already active in South Brisbane.

After activating the first batch of customers, Telstra last week started working with RSPs to determine how "mixed relationship" customers - for example, those who used separate companies for voice and internet - would connect under the fibre model.

"Previous to that, anyone who we thought was a mixed relationship customer, we hadn't spoken to yet," said Telstra's general manager of NBN consumer migration Steve O'Rourke.

"As each area rolls out, each service provider has the opportunity to talk to their customers. After that, it's up to a customer who they go with but the direct contact is from their service provider.

"It was about managing that so it was fair for all providers."

However, some ISPs currently offering ADSL services in the area have been less than pleased with the transition process.

The Fibre Access Broadband wholesale product sold by Telstra to third parties offered three speed tiers completely different from those offered under the NBN, and lacked many of the services relied on by service providers to differentiate, including multicast and quality-of-service.

Internode managing director Simon Hackett said the area was being "rapidly locked into the vertical monopoly past".

Other critics see South Brisbane as a foundation for fears Telstra would continue to close exchanges without consulting the wider industry.

The wholesale pricing, too, meant Telstra Retail was in many cases undercutting rivals, with users persuaded to switch to Telstra purely out of economic concern.

Though there were mixed feelings to the way the Telstra team handled the rollout for residents in affected areas, many were pleased with the end results.

The telco had over-provisioned speeds on the fibre network, so those with 100 Mbps connections saw theoretical speed ceilings of between 103 and 107 Mbps.

One house iTnews visited in Highgate Hill experienced a peak of 105 Mbps downstream and 5.6 Mbps upstream during a speed test.

These speeds, of course, would not necessarily translate into real-world improvements due to other factors but, where possible, technicians had tried to remove many of the hardware and software bottlenecks on residents' computers.

Telstra had opted not to include ADSL emulation on the NTU, requiring customers to run a new Ethernet point to places where a computer would be held and wi-fi was not desired.

However, in the house iTnews visited, Telstra technicians had installed a secondary Ethernet port where the computer was located in the resident's house free of charge.

Unlike the National Broadband Network, residents were offered an optional battery backup for the optical network terminating unit installed by Telstra.

In houses deemed to require "medical priority assistance", this backup would be maintained by the telco but those who opted for the backup outside of this would be required to replace their own batteries every three to five years.

O'Rourke, who would ultimately be in charge of the consumer migration from Telstra copper in the wider NBN rollout areas, said there were some parallels with South Brisbane but for now the telco was focused on the task at hand.