Antivirus scanning runs out of capacity.

The outage appears to have hit North American users in particular, with scores of customers reporting being unable to connect to Exchange Online for email service most of their business day.

It is not clear if Australian Office 365 were also affected by the outage.

Microsoft's official Office 365 account confirmed the outage on Twitter, but did not provide an estimated time of recovery. 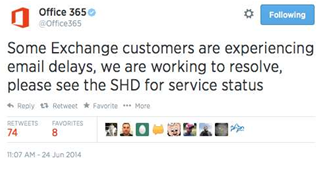 As of writing, Microsoft engineers had partly restored access to Exchange Online by rerouting traffic away from the degraded capacity, and the service is starting to recover.

Preliminary Root Cause: A limited portion of capacity within the Exchange Online service was impacting Exchange Online Protection traffic. The underlying root cause is under investigation.

Mail flow is now improving, and customers will begin to see service recovery as messages are being delivered and email queues drain.

Microsoft did not detail how many customers were affected, but said of those that did experience the issue, most of their end-users would have been hit.

Microsoft did not explain what was behind the EOP capacity issue. Some users are still experiencing problems connecting to Exchange Online and cannot send or receive emails.