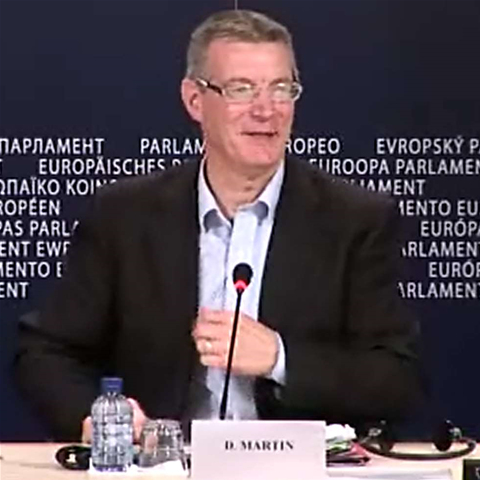 David Martin, member of the European Parliament at the news conference following the INTA vote to reject ACTA

As countries head to final vote.

The European Union's International Trade Committee has rejected plans to ratify the controversial Anti-Counterfeit Trade Agreement (ACTA) by 19 to 12 votes.

In a further setback for the treaty, the influential committee formally adopted the views of three separate sub-committees of the European Union, which all voted against ACTA earlier this month.

The treaty, which proposes to make changes to international intellectual property and trade law, has received wide criticism from a number of sectors and governments globally. Several European governments had previously indicated disdain for ACTA's provisions.

The committee's final vote also appears as an affirmation of a draft report into the agreement, which advised the “intended benefits of this international agreement are far outweighed by the potential threats to civil liberties".

"Given the vagueness of certain aspects of the text and the uncertainty intended benefits of this international agreement are far outweighed by the potential threats to civil liberties," the report said.

It was the fifth such rejection for ACTA in recent months, ahead of a planned final vote on ratification by the full European Parliament on July 4.

Great Britain representative to the EU, David Martin, said it was revealing that not one person on the committee had put forward a motion to vote in favour of ACTA.

It was a margin larger than anticipated for Martin, who has pressed for the treaty's rejection.

He stressed that the vote should not be construed as a vote against intellectual property but simply the treaty itself.

Though Europe needed to protect its intellectual property globally, he said ACTA’s provisions were too vague, leaving unanswered questions on the role of internet service providers in policing the internet.

He said there was no definition of “commercial usage” in the treaty and proposed sanctions against breaches of copyright seemed disproportionate.

But the International Federation of the Phonographic Industry (IFPI), representing the recording industry, blasted the vote as a blow to Europe's creative, innovative and manufacturing sectors.

IFPI urged responsible consideration of ACTA before its final vote in July.

"Counterfeiting and piracy, including on the internet, are creating a global black market threatening the economic basis of real jobs in the creative industries. It's a global problem that needs a global response. We need a tool like ACTA to improve international cooperation in IPR protection."

US professor Sean Flynn, a long-time critic of the treaty, said the likely end of the treaty in Europe may also spell the end for the US’ more aggressive demands for intellectual property in a similar treaty currently under negotiation, the Trans Pacific Partnership (TPP).

"The US demands in the TPP go far beyond ACTA on the most controversial subjects, including the evergreening of patents on medicines and regulation of the internet," he said.

So far Australia has only exempted itself from TPP provisions that would allow multi-national corporations with the backing of an international tribunal to trump local legislation on some matters. The provision was seen as a potential obstacle to the Federal Government's attempts to instate plain packaging for cigarettes.

Despite the European Union's continued rejections, Martin said six of the remaining signatories – including Australia – could still ratify ACTA.

Once the treaty was in force, Europe could renegotiate its participation in the treaty before re-voting on its ratification.