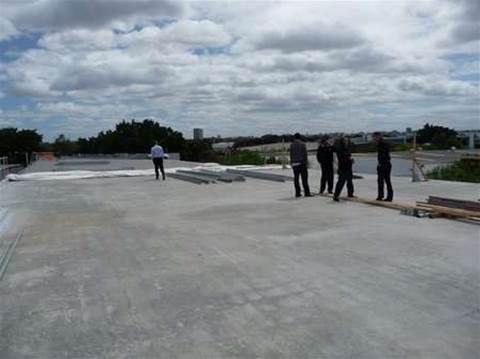 The Sydney Pegasus data centre will feature a version of 'free cooling' which uses the ambient outside air to cool water chillers housed on the roof of the building, the water from which is used to cool down the computing equipment inside.

"If the outside air drops below 15 degrees, the compressors on the chiller switch off and go into standby mode," Eaves said. "And between 15 and 22 degrees, they operate in a low cycle mode."

Eaves said Sydney is "the best place in Australia for free cooling" a data centre.

"It is less than 22 degrees Celsius for three quarters of the year," he said. "So for 274 days you can use outside air."

Eaves conceded that Tasmania and Melbourne would potentially be better options, if only the power grid and fibre connectivity options were as diverse in these areas.

Rack and cooling company APC will provide the hot aisle containment infrastructure for the interior fit-out of the data centre.

The Sydney Pegasus data centre will also be the demo centre for APC's latest range of kit.

"It is one thing to read about hot aisle containment - and another to see it working in real-time," Eaves said. "This is an amazing piece of gear."

Despite using free cooling, Eaves is hesitant to paint himself as a "green IT" eco-warrior.

"Anybody who says that are building a green data centre is kidding themselves," he said. "We are using up to 30kW per rack here.

"Free cooling is about saving money and power - you will hardly see data centre operators out there planting trees."