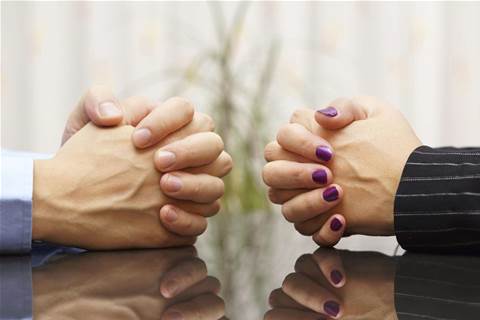 In his first public address since stepping into the role in April, the ex-banking executive said the last three months had been spent meeting secretaries and CIOs from across the public service to understand the DTA's not-so-rosy history.

"I’ve been using my two ears and one mouth – used in those proportions – to listen and to seek to learn and understand the history and the context of the DTA, and its role in delivering on the government’s ambitions," he told an Australian Information Industry Association forum in Canberra last week.

"These multiple conversations - including those I’ve had with many of you in the room - have allowed me to repair relationships, and importantly, build new ones."

The conversations revealed that agencies were keen to work together to deliver the government’s digital transformation vision, the CEO said.

"People are appreciative of being treated respectfully, being heard, being listened to and being involved in our work and helping to come up with solutions," he said.

This approach is a far cry from that of the agency’s former leadership, which made a point of dragging the rest of the public service behind it when it entered the fray in 2015 - a tactic that ultimately led to its downfall when key service delivery agencies were unwilling to get behind the single government website gov.au.

The agency said goodbye to this brash approach when former CEO Paul Shetler ceded power to seasoned Canberra bureaucrat Nerida O'Loughlin in a drastic restructure that saw the agency take on responsibility for whole-of-government IT policy and procurement.

Slater’s first months haven’t been without their own problems, however.

The agency has lost much of its old guard since the start of this year, including head of the digital marketplace Catherine Thompson and head of service design and user research Leisa Reichelt, among as many as 35 digital deliver gurus.

It is now banking on the help and support of all agencies to deliver the federal government's ambitions to improve digital service delivery, with Slater acknowledging the agency’s shift towards being "a facilitator on the things that matter".

"My vision and passion for the DTA is that we become known and respected as an agency that delivers disproportionate value relative to its size," he said.

"That we’re seen as a friend and go-to place for other agencies for help, and to provide guidance and advice.

"That we’re seen as a dynamic, fun, but outcome-oriented agency that attracts the very best talent from within the public service and from the private sector."

Slater also acknowledged that the Australian public service doesn’t currently have all the capability that it needs to deliver.

The DTA hopes to change this by placing 250 IT cadets and apprentices in agencies through two entry-level programs over the next 12 months.

The agency will also establish innovation labs in its Canberra and Sydney offices to embed a culture of "customer-centred design thinking, rapid prototyping, building alpha and beta versions, launching, measuring and iterating" in staff from across the APS.