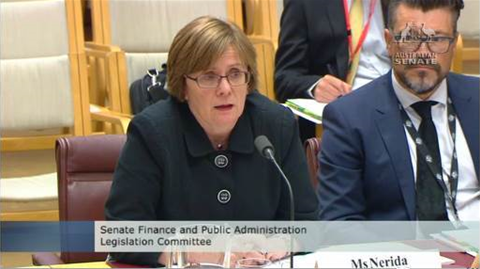 Digital Transformation Agency boss Nerida O’Loughlin says she doesn’t see it as her job to be a disruptor in the same way as her predecessor Paul Shetler.

Quizzed before senate estimates late last night, O’Loughlin said the expanded remit of the DTA - which was re-branded and re-scoped last October - means her role carries a different ethos to that of the head of the former Digital Transformation Office.

“The DTO was there to be a disruptor, to think about things differently, and to go into agencies and challenge them,” she said.

“It was quite different to my role and the role I see for my organisation."

APS stalwart O’Loughlin was installed as its new CEO, and Shetler was moved to a chief digital officer role answering to the chief executive before he controversially resigned from the federal government in November.The DTA was also given responsibility for IT procurement and whole-of-government project assurance.

“Of course when you're going in and trying to disrupt people you get push back,” O’Loughlin said of the DTO.

“In this role I have found strong cooperation amongst departments and agencies.”

However the DTA boss - who agreed to lead the agency on an interim basis last year - said the same disruptive core still exists within the agency, and flagged that the government intends to refill Shetler’s former government CDO role.

“With the creation of the DTA we have kept that core technology, user-centred design, and delivery aspect that was so important to the DTO: the role of challenging departments and agencies to think differently and to change the way they develop and deliver government services,” O'Loughlin said.

“The government has committed to filling the CDO position that Mr Shetler was in and I imagine that role would continue that same advocacy, or digital evangelism, if you want to put it like that.”

The DTA began advertising for a permanent CEO to step into O'Loughlin's shoes just days before Christmas, and closed applications in the middle of January.

It has yet to advertise the government CDO role.