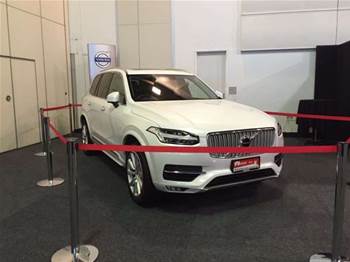 One of the autonomous Volvos showcased at the driverless cars conference in Adelaide (Source: DPTI)

South Australian premier Jay Weatherill is appealing to driverless technology companies to set up shop in his state, and fill the economic void left by departing traditional car manufacturers.

In 2014, both major car manufacturers in Australia, GM Holden and Toyota, announced they would cease operations in the country within three years, a move described as a “body blow” by Weatherill, as Adelaide bore the brunt of job losses.

Since then, South Australia has recorded some of its highest unemployment rates in 15 years.

In response, the state government has set its sights on an emerging driverless car industry to rebuild manufacturing in the state.

The premier today opened an international symposium on autonomous vehicle technology with an appeal to driverless car makers.

Weatherill labelled cars as "integral to the state’s DNA, our history and our identity”.

“The Holden production plant will soon close its doors in Elizabeth, but none of these events mean that we’ve lost our expertise our capability or our appetite to be a player in the car industry," he said.

“Indeed we see our history as a solid foundation on which we can be involved in technology, testing, perhaps even the manufacturing again, of driverless cars.”

The state government is busy doing everything it can to create the legal and regulatory conditions for companies to develop autonomous vehicle technology.

A bill is currently before parliament that will give the Transport Minister, Stephen Mullighan, power to authorise trials of driverless cars on South Australian roads. The premier said he is expecting “speedy passage” of the new laws.

On Saturday, Weatherill and Mullighan could become some the first Australian passengers of driverless vehicles as an auto-piloted Volvo is trialled on Adelaide’s Southern Expressway.

It will be the first on-road demonstration of the technology in Australia.

To bolster its international appeal, the state is also looking to build infrastructure into all its new road projects to prepare them for vehicle-to-vehicle communications.

“When we build new road infrastructure, like the Torrens to Torrens project, the Darlington project and the Northern Connector, we are hardwiring those roadways to be able to bolt on the technology at the point in time we are ready to deploy it,” Mullighan said today.

“Just in the last 12 months we have been rolling out bluetooth receivers across all of our traffic signal boxes in greater metropolitan Adelaide."

Mullighan also boasted that SA had installed the “most advanced traffic monitoring solution of any state in Australia”, able to capture 15 percent of all vehicle movements while other mobile phone triangulation methods are still stuck at 2-3 percent.

The premier said the state was serious about becoming a driverless manufacturing hub, even if it means dominating just a slice of the technology production line rather than end-to-end car assembly.

The state has already received “a number of approaches” from companies interested in calling South Australia home, he said.