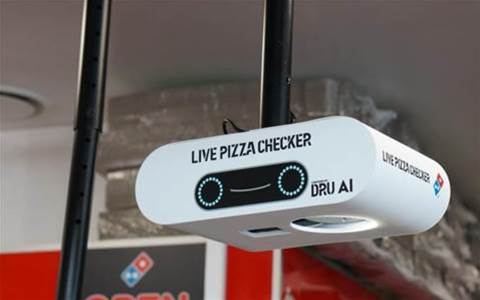 Despite local sales growth that fell short of management's expectations, Domino’s Pizza is continuing to hit the accelerator on new systems to maintain its premium position in the "Internet of Food".

The company’s 3TEN initiative, a push to make an order within three minutes and deliver it in 10, is underpinned by deployment across its stores including its AI-powered Pizza Checker first flagged in November 2017.

In a half-yearly results call to investors, the company said it had been hoping to have Pizza Checker deployed across Australia in the last half.

Australian chief executive Nick Knight said the system developed with Dragontail Systems is a year late “because it took a little bit more time to get right, but really I really feel like have done that now”.

“And we are now ready to be fully rolled out in South Australia by the end of this week.
I continue to get incredibly excited when I see feedback reports from customers who are getting an order checked by Pizza Checker,” Knight said.

A new app is also set to go live by June, which Knight said will not only be a “simpler, faster, more rewarding experience for customers, but it will be an app you’ll be able to open in any of the DMP (the company’s ASX ticker) countries and order a pizza in any of the markets that we operate.”

The current app has already integrated augmented reality capabilities, allowing customers to build their own pizza by dropping ingredients onto a 3D model base superimposed onto images coming from the phone’s camera.

Online sales through the app and the Domino’s website increased globally by 16.5 percent
on the previous half, with online orders now regularly exceeding 70 percent of network sales in Australia and New Zealand.

That works out as slightly 2 million pizzas and sides ordered online every week in the region.

Dutch customers win out as the biggest online customers, however, with only five percent of customers in the Netherlands calling into a store to place an order.

Domino’s is hoping the successful delivery of these customer-facing updates in the coming months will lift sales in Australia and New Zealand, which only grew 6.2 percent in the half.