Domino's admits drone delivery is still a way off 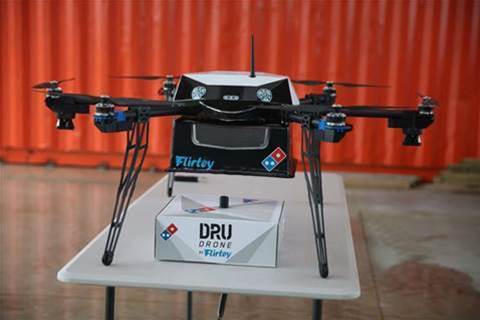 "This is not a gimmick".

Domino's has admitted there is still a long way to go before it can deliver pizzas via drone, especially in Australia, but the retailer is adamant the much-publicised service is not a gimmick.

Last August the company said it had partnered with drone delivery company Flirtey to bring its products to New Zealand customers via remote-piloted aircraft.

The trial saw a drone drop pizzas from one selected store to customers in Auckland under the eye of NZ's Civil Aviation Authority.

In New Zealand unmanned aircraft operators are allowed to fly approved drones weighing between 15kg and 25kg in daylight, within line of sight and under 120 metres in height, among other restrictions.

But drone operators in Australia can only fly aircraft weighing under 2kg commercially without a licence. The new rules came into effect last September.

Domino's had conducted the trials with small drones that can carry a payload of 2.5kg, based on standard retail delivery figures.

Meij said the trial had revealed Domino's average deliveries - which generally include drinks as well as sides, making the package heavier - sat at 3.5kg.

He said the pizza giant would need to deploy bigger drones to be able make more deliveries, and over a longer distance.

Chief digital officer Michael Gillespie also said the trial had shown that the drones were taking too long to get to a customer's premise - the retailer needed to get the figure down to under ten minutes, he said.

"Often you can trade off distance and weight.  But both of those things are being solved, and we will be announcing when the next project will roll out," Meij said.

"This is not a gimmick."

Meij said Domino's was unable to estimate how many orders would be filled by drone delivery over the next few years.

He also said Australia would be at least fourth on the list of countries in which Domino's would offer drone delivery.

"We're still mapping that out. Obviously we can't be near airports, power lines, all sorts of things like that. We need to be able to access the back of the home, but we do forecast that it'll be a double digit number," he said.

"We'd love to do it in Australia, we really believe in the ecosystem here, but the reality is it'll be New Zealand and two other countries before we make it to Australia at this point."

It is planning further trials in New Zealand in the second half of the year.