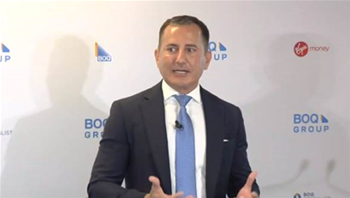 The Bank of Queensland’s transformation and digital strategies, and its acquisition of MeBank, have helped it deliver increased savings, new product launches, and new kinds of customers.

Delivering its financial results for the half-year that ended in February, managing director and CEO George Frazis said BoQ is well on the way to becoming “a single, cloud-based, digital retail bank”.

Frazis said the transformation and digitisation programs helped BoQ deliver a 14 percent lift in net profit to $212 million, with expenses down three percent compared to the same period last year.

Getting the single platform in place will also improve the bank’s cost base, Frazis said.

During the quarter its Virgin Money mobile app was moved to the cloud, its first brand on the unified environment.

BoQ Retail also launched, which he said demonstrated the multi-brand capability of the single cloud-based platform.

Frazis said the 2021 launch of the Virgin Money App had attracted a new kind of customer to the bank: “younger, urban, and digitally savvy”.

A key aspect of BoQ’s integration project is the ongoing development of the bank’s Temenos platform, which began in 2020.

During Q2, the bank completed its migration to Temenos v18, with Frazis telling the earnings call “30,000 customers have been migrated, and five apps and 20 servers decommissioned”.

That implementation resulted in the decommissioning of the previous Ultracs system that came with ME Bank, and later this year, BoQ will migrate to Temenos v20, its cloud version.

According to outgoing CFO and COO Ewen Stafford, the integration program which began when the bank acquired ME Bank contributed significantly to profit-and-loss synergies of $13 million for the half year.

BoQ is on track to deliver between $38 million and $42 million in synergies, including staff reductions, for the full year, and Stafford is predicting that by 2024, total savings will be around $95 million or 125 percent of what was originally predicted.

The shift to software-as-a-service has also made a significant change to BoQ’s balance sheet, Stafford reported, saying it cut $47 million from the carrying value of software by September last year.

The ME Bank technology integration costs for 2022 will be spent on collaboration tools and network integration, Stafford added.