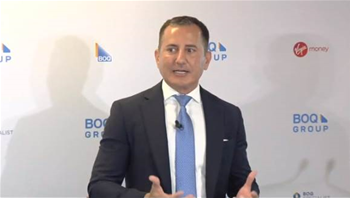 Fails to rule out Suncorp merger as it consolidates 13 cores.

The beleaguered Bank of Queensland has finally bitten the upgrade bullet and will abandon sweating its disparate legacy IT stack, telling investors it’s preparing to shell out $440 million in fresh capex over five years on a digital-led transformation to drag it into the cloud era.

Whichever way you look at it, it’s a big-ticket IT rebuild cut into small pieces to help investor digestion.

“We are not having any large programs that go on for multiple years… which is where I have seen, in my past experience, where you get a little unstuck,” Frazis said.

Except that it’s $440 millionj in indicative capex over five years. Which is not small or short.

In official investment parlance, the $440 million is anticipated capex rather than firmly committed spend. The hard number will come in the next set of financials.

“We will deliver results while transforming the bank,” Frazis said, carefully eschewing any notion of a big drop which has come to haunt rivals like Suncorp.

“This is not about promising something that is going to be delivered in 5 years time,” Frazis said.

“There will be no customisation.”

Notably, like the CBA, it’s the CEO attempting to talk-up the institution’s tech-savvy rather than leaving it to the IT crowd – although Frazis sounded less comfortable than Matt Comyn when dropping the nerd nomenclature.

The only brand drop was core banking specialist Temenos, which BoQ has recently discovered also does a real-time and cloud-based version of its core software, rather than just batched on-prem.

That’s a sure sign that piles of ageing kit and software will soon be headed for the scrap heap as part of a root-and-branch overhaul of products, processes and foundational technology that has devolved into a disparate and disconnected mess that holds BoQ back.

And it’s quite a pile too.

“On the retail side we have two core systems and about seven systems that interact with our customers,” Frazis said.

“On the business banking side that picture becomes even more complex. We have ten core systems and eleven systems for how we interact with our customers,” the BoQ head complained.

“That’s been described as a ball of spaghetti.

“What we are not doing is fixing that ball of spaghetti. We are about building the new and then migrating to that new,” Frazis said.

BoQ’s strategy to date has been buying in value from more nimble plays, like Virgin Money, rather than taking the more capex-intensive route of building its own.

Which means it has a quicker, cheaper way of upgrading but may not have crucial road memory to dodge the potholes.

Frazis reckons there’s plenty of upside, though he did not rule out a merger with core systems misery mate Suncorp, which cannot get Oracle to work.

“Development in technology…gives us the opportunity to successfully compete against major players, enabled in part by standardised cloud technologies and the customer’s shift to mobile,” Frazis said.

“Our digital transformation will be methodically staged initially for the retail bank. We are starting off with our Virgin Money brand.”

Frazis said BoQ will progressively “migrate the rest of the bank as each stage is successfully completed”, referring back to the five-year plan that aimed to “deliver us the strength of and established bank and the agility of a neobank.”

But the Conradian horror of failed IT empire building is still there.

“We have got a got a very, very complex environment,” Frazis said, talking to BoQ’s propensity to acquire businesses without integrating them.

“The complexity and costs are there as a result of that,” Frazis said.