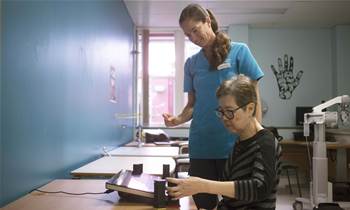 The solution, dubbed EDNA, was developed by researchers at RMIT University and the Australian Catholic University to improve early access to rehabilitation following a stroke and ongoing at-home care.

EDNA was initially designed for use with tabletop-sized touchscreen device, coupled with graspable tools of different shapes for therapeutic games that promote brain plasticity to help patients regain motor, cognitive and functional ability.

Game data is then collected in the cloud, meaning patients can use the device when they return home and therapists can remotely monitor their recovery.

“We designed EDNA so that patients could be doing therapy without it feeling like therapy.”

Prince of Wales is one of the hospitals currently engaged in a trial of smaller tablet devices to make EDNA more accessible by removing the need for a desk-sized touchscreen.

Occupational therapist at the Prince of Wales, Karin Vogel, said the digital platform is quite different from traditional therapy.

“For me it’s been a great benefit. The fact that I can monitor patients’ performance and engagement with the technology online, it means I can service a greater amount of patients living at home in the community while I’m sitting at the office.

A randomised clinical trial showed stroke patients who incorporated EDNA into their treatment programs experienced an improvement two to three times greater than those who received only conventional therapy.

Duckworth said that while the results can't yet be used to predict longer-term recovery, the findings are promising and show the potential value of including EDNA as part of a therapy practices.

Dr Jeff Rogers, neuropsychologist and principle investigator of the project, said that the end goal of the research was for patients to be able to do the things that are important for them as independently as possible.

“In Australia about 50,000 people a year suffer stroke and about two-thirds to three-quarters of those people are left with significant movement difficulties and cognitive impairment - the overwhelming majority.

“What that means is stroke is a leading cause of disability here in Australia as well as worldwide.”