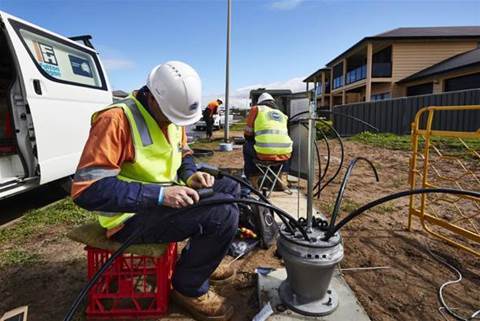 Industry yet to be consulted.

A $3 billion plan to upgrade half of the NBN fibre-to-the-node (FTTN) network to full fibre still needs to be put to industry consultation, where finer details of the offer will be determined.

The government unveiled the upgrade plan on Wednesday morning, saying that FTTN users would need to order an unspecified “higher speed plan” to then apply for a last-mile fibre upgrade.

The terms and conditions of the government’s offer were immediately unclear - but that is because they are yet to be decided.

iTnews has learned that the upgrade program is yet to be consulted on with retail service providers (RSPs), having been kept confidential until today.

It’s likely that RSPs will play a significant role in the program, as they will need to market the qualifying high-speed plans to their FTTN user base.

Interest in those plans then needs to be collated and communicated back to NBN Co.

It’s understood that NBN Co intends to group premises that qualify for the fibre upgrade according to location, and then to schedule truck rolls accordingly to ensure the upgrades are performed in as capital efficient manner as possible.

What that means for the timing and cadence of the upgrades is unclear. The government has so far only committed that the work will be done by 2023.

"The fibre already built to the nodes as part of the FTTN build, known as the Distribution Fibre Network (DFN), will be utilised and incorporated to deliver new FTTP services.

There is also considerable interest in trying to determine how conditional the fibre upgrade offer will be.

NBN Co already offers free or deferred cost fibre deployments to many business customers, but the arrangements are conditional on contracting for a certain number of years and at a certain level of usage.

There are cost clawback arrangements in the event that the business customer receives fibre but, for whatever reason, does not uphold their end of the contract.

NBN Co has recently altered its 250Mbps and up to gigabit plan pricing, which has led to strong early take-up numbers.

However, it’s not clear if the company can or will make the same offer to FTTN upgraders; at the very least, it may be able to keep the same price level but amend the terms, given present sign-ups to that plan already have capable lines, whereas the FTTN upgraders won’t.

Another possible option is that NBN Co, by now, will have amassed a tidy list of customers unhappy with their current access technology via applications to the Technology Choice program.

As reported by iTnews in May, NBN Co has seen a sizable increase in the amount of quotes issued to customers wanting to pay their own way to a faster access technology via Technology Choice over the past three years.

As of March 25 this year, it had provided a shade under 1000 FTTN to FTTP individual premises switch quotes.

It did not say how many had been accepted, though the rate is historically low - much less than one in every ten applicants.

At the very least, users that applied for the program but balked at the costs could form a useful list to re-approach with a government-pays upgrade offer.

There are further questions around Technology Choice itself; until now, people that wanted fibre could have it at a price, whereas now the government is offering to step in and foot the bill.

It’s unclear whether any concessions will be offered to those that footed the bill themselves, only for those upgrades to now be paid for by another party.