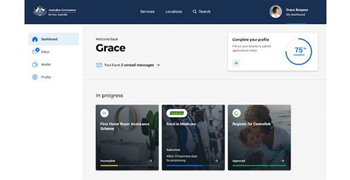 The Digital Transformation Agency’s contract with Deloitte for the beta build of the government’s new Facebook-inspired digital service platform has climbed for the third time in six months.

The value of the six-month deal for ‘horizon one’ of the government’s new digital experience platform (GOVDXP) jumped for the first time since June on Thursday, increasing from $23 million to $28.1 million.

Deloitte began developing the platform - which is expected to eventually replace the existing myGov portal - since it was handed an initial $1 million deal to build the initial prototype in February.

In March, the big four consultancy was awarded a follow-on contract worth $9.5 million that doubled in cost just two months later for work beginning the same day myGov crashed due to the coronavirus induced economic lockdown.

Under the contract, Deloitte is developing the beta GOVDXP, as well as a “web-based myGov inbox, opt-in notifications and login access to myGov”, which falls under ‘horizon one’ - one of three releases for the myGov update platform.

GOVDXP launched for beta testing in June, but it is a long way from the vision of a single, tailored view of citizen’s interactions with the government presented by the DTA earlier this year.

While horizon one was expected to be complete as soon as the middle of this month, the amendment published on Thursday appears to push out that timeframe for the first time since the project began, but by only two weeks.

Horizon one builds on GOVDXP's 'horizon zero' - a homepage on Australia.gov.au, which the DTA released in March, to help centralise information on the pandemic.

There is also no word yet on the important system integration contract, which the DTA went looking for in March to support GOVDXP’s horizon two, despite plans for that work to kickoff in July.

The system integrator will be tasked with delivering an integration later that will sit over Services Australia existing myGov system for the Centrelink, Medicare and Child Support master programs.

Horizon two will also deliver a “new front end”, which will “provide dashboard, profile, inbox and forms, along with information systems such as content pages and notifications”, the DTA said in March.

“The platform will collect services, apps and other customer experience capabilities to give users everything they need,” a blog post states.