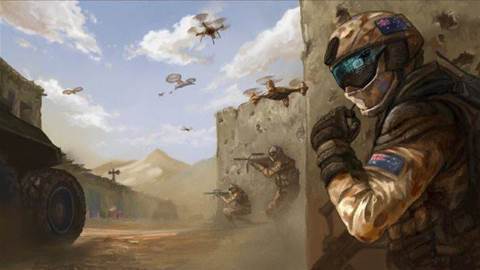 Australia’s frontline troops could soon begin using drones, sensors and suite of other sophisticated technologies to choreograph their movements and perform calculated yet deadly strikes in close combat situations.

That’s the vision for the Defence department’s solider combat system program (SCSP), which plans to “augment” soldiers with robotics and autonomous systems (RAS) over the next decade.

The department has put out the call for information to inform its approach to the human-machine teaming (HUM-T) initiative over the next two years after an initial stakeholder workshop in July.

It follows work by the Defence Science and Technology Group over the last year to understand what Australia's “next generation soldier” might look like.

By partnering “advanced robotic systems with humans”, the department hopes to achieve “tactical advantage” by “modernis[ing] levels of protection and lethality” for its foot soldiers.

“The present soldier combat ensemble (SCE) provides the best protection and mobility suite of equipment ever offered to Australian combatants,” the request for information states.

“While the present baseline is excellent, the evolution of emerging technologies and speed of lethality advances requires a modernisation approach that is not reliant upon incremental advances in extant protection systems.

“The next development of the SCS must commence integration of machines, sensors and data that support close combatant survivability, lethality and local environment understanding.”

But in order to introduce these emerging technologies, the department will first need to improve data access at a tactical level, which is currently “almost non-existent”.

“The lack of tactical data access limits the capacity for cooperation between sensors, machines and people and prevents better use of emerging digital technologies,” a discussion paper associated with the RFI states.

Defence will use the RFI to “explore, test and refine user requirements” by understanding what RAS capabilities are current available and how they might assist foot soldiers from 2023.

Some of the technologies already envisioned include palms-sized autonomous systems for either airborne or ground-based reconnaissance or combat that dock with a soldier’s combat equipment.

Sensors, both biometric and environmental, and cameras are also being considered for threat detection and to monitor the health of soldiers and ammunition levels, with data feeds delivered on the ground in real-time.

An example of a future battle scenario provided by Defence describes a situation where drones – or wide area surveillance platforms (WASPs) – feed combat patrols with data through an AI system.

The AI system feeds that data to a soldier’s augmented reality ballistic glasses, providing a heads up display of threats alerts, life indicators and ammo levels, to inform decision making.

The solider would then be able to compare that live data with pre-loaded mission data and maps and use image recognition and deep learning algorithms to identify enemy combatants and any movement trends.

“Destroyer drones” could then be dispatched from a soldier’s combat equipment fitout or personal augmented support system (PASS) and guided using the WASPs.

Defence has warned, however, that the development of the capabilities for the close combat environment is “ambitious”, as the “technologies have not been integrated to achieve a collaborative effect”.

Defence is planning to hold events in Victoria, the ACT and Queensland throughout 2020 and 2021 that will further outline its plans for the HUM-T concept.