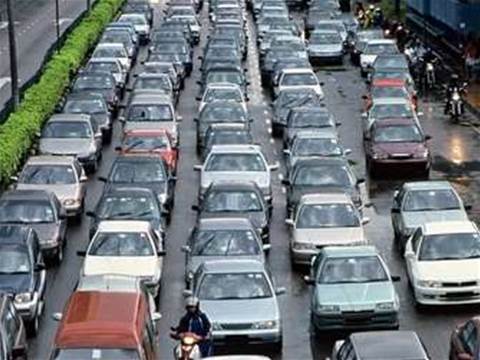 The chief executive officer defending an online copyright case has had alleged statements he made about the nature and quantum of online traffic that passes over his ISP's network used against him in the Federal Court.

iiNet chief executive officer Michael Malone agreed with plaintiff barrister for the Australian Federation Against Copyright Theft Tony Bannon that he would "expect or guess that half or more than half of traffic by volume across his company's network is BitTorrent traffic".

BitTorrent is a technology that allows online users to share parts of a film or song, for instance, over the internet. The pieces are stitched together on the user's PC to form a whole file for playback. The federation brought the test case against No. 3 Australian ISP, iiNet, alleging its networks were used for widespread distribution of illicit material and that the provider did too little to stop alleged infringers who were its customers.

As the federation's case entered a third straight day of Malone's cross-examination Bannon surfaced statements the iiNet founder made to journalists and in the Whirlpool broadband forum over the years.

They included references to peer-to-peer traffic volumes and types of traffic traversing either iiNet's network or the internet.

"Your view is certainly that BitTorrent is and has been consistently used on your company's system for the downloading of compressed digital copies of TV shows and Hollywood movies?" Bannon asked, referring to comments Malone allegedly made to an Australian Financial Review journalist three years ago.

"Last time I tried to estimate a percentage I got smacked around by you for it," Malone said.

That was a reference to a dressing-down Malone received from Bannon on the first day of his cross-examination after Malone estimated how many infringement notifications ISP Westnet passed to its customers.

"Don't be intimidated by past experiences," Bannon said. "Dealing with your state of mind, at the very least a substantial percentage or proportion of the BitTorrent traffic on your network, as with BitTorrent on any network worldwide, has involved the downloading of TV shows and Hollwood movies?"

"You'd thought it quite likely, had you not, that the proportion might be very high?"

Malone said "I shudder to make a percentage estimate" to which Bannon replied: "Don't be afraid".

"Yes it would be high but I don't know if I could say very high. There have been more and more legitimate uses of BitTorrent over the years," Malone said.

"I'm asking whether you'd agree with me that your state of mind over the last couple of years is that the proportion of such traffic on your network, BitTorrent traffic, of films and TV shows being unauthorised copies being downloaded, that proportion is quite high?"

"Would you expect that use of the BitTorrent application is likely to involve unauthorised copies of films and television shows?"

"I think on a customer-by-customer basis that's difficult to assert," Malone said.

"But by volume you agree with me?"

"And you think it likely that a large volume of bandwidth used by your customers as a group consists of unauthorised downloading of the applicant's films and TV shows?"

Malone agreed with Bannon that iiNet would "expect or guess that half or more than half of traffic by volume across [Malone's] company's network is BitTorrent traffic".

"Half of traffic - that's an enormous amount of bandwidth quota isn't it?" Bannon said.

"That represents a lot of demand for bandwidth quota doesn't it?"

Bannon accused iiNet of wanting to attract heavy-bandwidth users to increase its profits.

"And you're happy to take their money in the meantime?" Bannon asked.