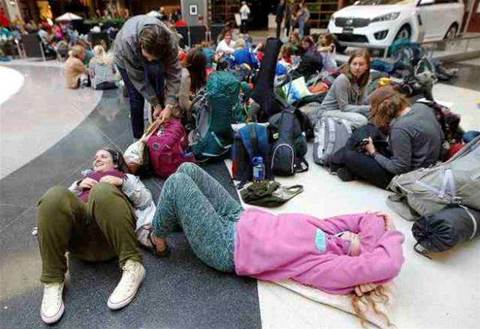 Delta passengers wait at airport as their flights were cancelled. Reuters/Tami Chappell.

US airline Delta has cancelled hundreds of flights and delayed many others after an outage hit its computer systems, grounding planes and stranding passengers of one of the world's largest carriers at airports around the globe.

Delta Air Lines, the second-largest US airline by passenger traffic, said it had cancelled 451 flights after a power outage that began around 2.30 am EDT (4.30 pm AEST) in Atlanta. Flights gradually resumed about six hours later.

Delta said it was investigating the cause of the "system-wide outage." As of 1.30 pm EDT, it was operating about 1679 of its nearly 6000 scheduled flights.

The problems arose after a switchgear, which helps control and switch power flows like a circuit breaker in a home, malfunctioned for reasons that were not immediately clear, Georgia Power spokesman John Kraft said.

The carrier was probably running a routine test of its backup power supplies when the switchgear failed and locked Delta out of its reserve generators as well as from Georgia Power, industry analyst and former airline executive Robert Mann said.

That would result in a shutdown of Delta's data centre, which controls bookings, flight operations and other critical systems, he said.

A member of the Flyer Talk web forum claimed the captain of a Delta Air Lines flight from John F Kennedy airport in New York City to Salt Lake City in Utah said the outage happened during a routine switch to a backup generator in the early hours of the morning.

The switch caused a fire that destroyed both backup and primary generators and was difficult to put out. Some 400 out of 500 Delta servers in the data centre rebooted. There was a delay however before the last 100 servers started up again, and Delta's IT systems became fully functional, the flight captain said.

A Delta spokeswoman declined to comment when asked about backup systems.

Delta's flight information was not showing correctly on Delta's website or on airport information boards, and this could also take time to resolve, the carrier said. Mann said monitors typically display cached data until the computer system updates with new information.

According to website Flightradar24, some of the first flights to take off were from Amsterdam to the United States, while a flight from Phoenix to Atlanta was among the first to depart from a US airport.

Delta is a member of the SkyTeam alliance alongside airlines including Air France-KLM. It also partners for transatlantic flights with Virgin Atlantic Airways Ltd, which said its flights were operating normally but cautioned that passengers should check tickets in case their flight was due to be operated by Delta as part of a code-share agreement.

Delta said passengers booked for travel August 8-12 would be entitled to a refund if their flight is cancelled or significantly delayed.

In airports around the world, passengers stuck in check-in queues or on planes waiting to depart took to Twitter to share photos and frustration at the delays, as well as to ask how a major airline could be grounded by a power cut.