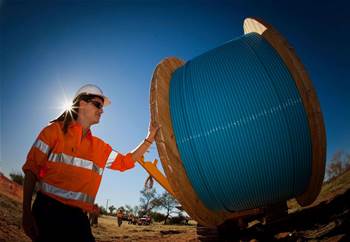 Internet service providers are set to install ADSL2+ equipment in Darwin suburbs in the coming weeks as the Federal Government switches on a backhaul cable linking the Northern Territory capital to Toowoomba in Queensland.

The cable aims to provide competitive backhaul to 23 sites covering more than 160,000 residents.

Launched in 2009 as a foundation for the National Broadband Network, the program aimed to provide affordable backhaul competition to five Australian regional centres via the rollout of over 6000 kilometres of fibre optic cable. Previously these regional centres had no competing backhaul service to those offered by market incumbent, Telstra.

But the backhaul has begun to play a more immediate role of promoting competition among DSL service providers in regional towns as large as Darwin, where few broadband providers had previously dared to attempt to compete.

Service providers have been quick to take advantage of the opportunity.

On launching the first wholesale services in Geraldton in March, Nextgen immediately began taking orders from iiNet (and subsidiary Westnet), which was keen to expand its regional presence and boost broadband speeds to regional Western Australians under a $5 million upgrade.

More than 2000 customers have since signed up for services on the new equipment: with everything from basic internet, fetchtv (IPTV) and iiNet's business voice offering.

The story was similar for Victor Harbor in South Australia, where Internode prepared to deploy a new DSLAM as soon as the backhaul was ready.

Both service providers have told iTnews they have DSLAMs ready to go for four exchanges in the Northern Territory once the backhaul is lit up.

Internode also plans to add a point of presence in Darwin, providing faster local access to Northern Territory content and other users in the area.

Tnternode and iiNet are among a total seven service providers signed to lease backhaul on the network to date. NEC is building 62 DSLAMs on the back of the project, as is NBN Co, which will lease backhaul as part of its transit link.

"I think it's a remarkable demonstration of what an astute, almost a surgical investment in telecommunications infrastructure can do to unlock service providers around the country," Nextgen networks managing director Phil Sykes, told iTnews.

"Putting in backhaul around Australia like this has stimulated service providers to go places they weren't previously economically able to do so."

Few ISPs attempt to compete in areas where Telstra is the sole provider of backhaul - and those that do usually resort to reselling Telstra Wholesale ADSL ports.

The incumbent's service is also technically restrictive, forcing residents and businesses in the area to settle for dial-up or ADSL speeds if they aren't capable of forking up extra for fibre connectivity.

One telco executive told iTnews the RBBP initiative brought a "ten-fold reduction" in wholesale backhaul pricing - regulated for equal access by the Government - over Telstra's fibre in some areas.

While some providers would still need 200 to 250 customers per exchange to make a new DSLAM viable - compared to 150 in urban areas - the backhaul cost alone in these areas almost immediately makes the prospect of installing new competitive services in these areas worthwhile.

"It's been a huge positive change for the communities that the RBBP process touches," said Simon Hackett, managing director of Internode.

"These are communities who finally have competitively priced backhaul and who are, as a result, able to obtain competitive DSLAM services at last."

While pleased with the prospect of alternative backhaul, ISPs pointed out that there was more to do to bring competitive options to regional communities.

"We talk to a lot of the mining guys and they're just screaming for competition to the north-west [WA]," he told iTnews.

"There's a hell of a lot of people who live up there now and a lot of the councils and businesses are trying to attract residents to build up those communities. The fact that they can't get metro-equivalent services is a shame."

Nextgen had suggested constructing backhaul to 13 total sites as part of the Government's 2009 consultation on the project, including as far north as Karratha in Western Australia.

However, Sykes maintained the RBBP could now form the foundation for further works to those areas which had missed out.

Small communities had already begun lobbying state and federal governments for the funding required to build out fibre from key locations along the backhaul.

"A lot of those sites are not far from this network so with a modest further investment one could build almost spurs off our network to reach very very significant additional number of regional sites," he said.

"While we've hit what we think is the most optimal combination of under-served areas, to reach the next batch we now have broken the back of that problem."

"The political conditions that lead to the RBBP project being created have since changed - so that we don't expect any sort of 'RBBP Phase 2' to ever happen," he said. "But in the meantime, there is an enduring and positive competitive impact for the places that RBBP is connecting up."

Next: The cable build...