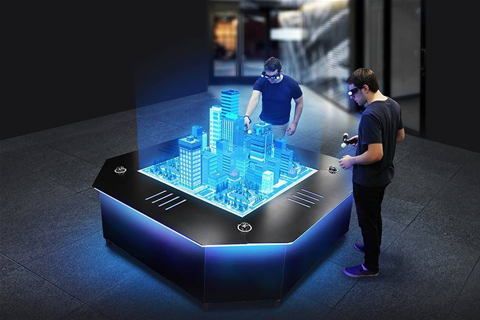 Like a scene out of crime procedural TV series Bones, researchers at Curtin University will now be able to visualise and interact with data and 3D models on a holographic table.

HIVE manager, Dr Andrew Woods, told iTnews that unlike some of the other facilities such as The Cylinder that wraps around viewers, the Hologram Table shows an omni-directional view of data sets and objects, which naturally lends itself to realistic depictions of bird’s-eye views of mine sites, urban planning, or even planetary surfaces and shipwrecks.

“The device allows 3D objects to be displayed on the 1.5 metre table-top display, allowing users to twist, turn, slide, zoom, magnify and explore virtual 3D objects as if they were interacting with actual physical objects,” he said.

“What is especially exciting about this system is that two users can use the table together, collaboratively exploring the 3D image while wearing the special active stereoscopic glasses that triangulate each users’ eyes individually at 60 frames per second, allowing them to walk 360 degrees around an object while their perspective changes in real time.

“For example, if one person points to an object on the Hologram Table, the other user can see exactly what they are pointing at, as if they were both looking at a tangible object.”

An additional two pairs of ‘buddy glasses’ allow extra users to watch, but not interact with, the 3D display, while a separate monitor shows a 2D depiction of the dataset. 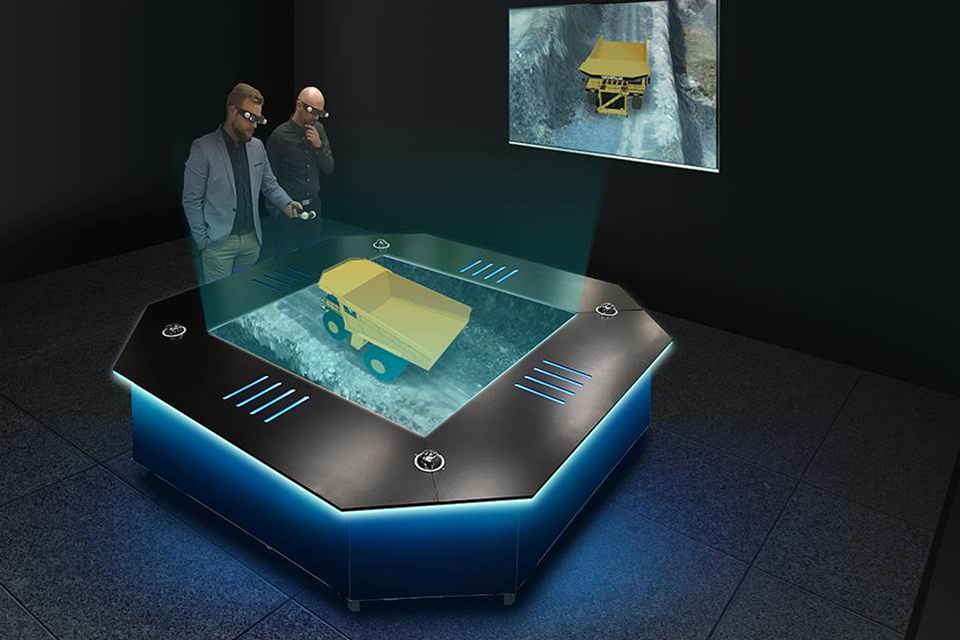 While the HIVE has produced over 200 visualisations for researchers across all of Curtin’s faculties since being established in November 2013, one of the first to use the Hologram Table was astro-geologist and cosmic mineralogist Professor Gretechen Benedix.

Benedix has been using the table to visualise explore and identify craters on the surface of Mars, specifically the future landing site of NASA’s 2020 Mars Rover which is set to touch down on the red planet in March next year.

“This Hologram technology has opened up a new way to look at planetary surfaces, providing a unique perspective that hasn’t really been easily available before, giving a bird’s-eye view that is different from the current satellite and ground views we already have,” Benedix said in a statement.

“My team and I are using the table to investigate the results of a machine learning algorithm we’ve developed to count craters on the surface of Mars.

“This allows us to extract age information of specific features or landforms in this area, which can be investigated by the latest NASA Mars Rover when it arrives.”

Other projects already underway include research into health sciences and an exploration of Australia’s first submarine, the HMAS AE1, which was lost at sea off Papua New Guinea over 100 years ago.

Woods said that the ability to realistically portray any kind of environment - real world or fictitious - is what excites him most about the Hologram Table, which is one of just six in Australia and the first in Western Australia.

“You see these images projected out of the table and it’s almost as if you can touch them. It’s just sitting there in front of you in full three-dimensional accuracy.

“The realism and the accuracy provides a good way of making what is rather abstract very realistic.”