CSIRO electrical shirt to give soldiers a buzz on the battlefield 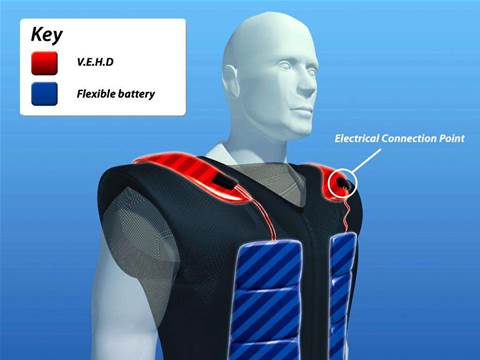 The Australian Defence Department has injected $4.4 million worth of funding to further the CSIRO’s research into designing clothing which can be used as a self-recharging electrical source on the battlefield.

The CSIRO’s Flexible Integrated Energy Device (FIED) was one of eight proposals selected as part of the latest round of Defence Capability and Technology Demonstrator (CTD) Program funding announced in October.

The FIED, which will be designed to resemble ordinary garments, will be used to store and provide energy over a continuous period of time. It can be charged by either vibration energy harvesting or through plugging into an electrical power point.

“It will look like an ordinary garment but have extraordinary capabilities,” said principal research scientist with CSIRO’s Energy Technology Division, Dr Adam Best. “As the person wearing the garment moves, the vibrations they create can be harvested and channelled into recharging the battery or powering plug-in electronic device or devices.”

He said the technology would be unobtrusively incorporated into a piece of clothing with three components: advanced conductive fabrics that form the battery, a vibration energy harvesting device and a rechargeable battery with low flammability and toxicity.

The $4.4 million funding will be used to help the CSIRO bring forward a proof of concept and prove the capability is actually possible.

“The funding will be used to integrate the transducer into the garment to a place where energy can be harvested form the person’s body,” Best said. “Essentially, they’d be wearing the battery, not carrying it. We’re excited about this funding because it means we’re a step closer to making the FIED a reality.”

The CTD program is run through the Defence Science Technology Office as a Department of Defence technology funding initiative.

The Defence Department is hoping that once the technology is proven, it will be used on the battlefield to eliminate the cumbersome and wasteful batteries that soldiers must carry around to fuel a host of devices including communications equipment, imaging devices and small computing equipment.

“This will make a huge difference on the battlefield where soldiers are weighed down by kilos of disposable batteries they have to carry to power their gear,” said Andrew Arnold, director of the CTD Progam Office.

The funding will be spread over a three year period in which the CSIRO must bring the technology to real world use by making it robust enough to operate in all environmental and weather conditions.

“It has to be soldier proof,” Arnold said. “And if the CSIRO can do that, then the Defence Force will take it on.”

After it has successfully completed the research and proof of concept, CSIRO’s Best said the government research body would look to attract an industrial partner to help take the garment to market.

Aside from military applications, Best and his team are looking to position the FIED as a consumer and sports product where it could be integrated into garments and used to power heart-rate monitors, iPods, and even mobile phones or PDAs.

“Being able to have a flexible battery and have them based on this fabric architecture allows you to free up designers minds to do really do different things that previously they may not have been able to do,” he said.

Furthermore, the CSIRO also received $2 million in funding from CTD for its research into Kevlar body armour based on nanotube technology.
Got a news tip for our journalists? Share it with us anonymously here.

Tags:
a battlefield buzz csiro electrical give hardware on shirt soldiers the to