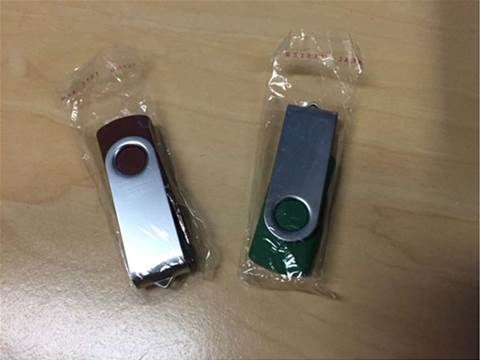 Victorians warned not to plug in malware-laden devices.

Would-be cyber criminals have been targeting Victorians by dropping malware loaded USB-drives into their letter boxes, in the hope unsuspecting residents will stick the devices into their home computers.

The Victoria Police have published a memo alerting Pakenham residents to the scam, following a spate of reports last week.

The force published a photo of some of the unmarked thumb drives it has already recovered from Victorian mailboxes.

It said recipients who inserted the USBs into the computers were served “fraudulent media streaming service offers, as well as other serious issues”.

The malware on the devices has been described as “extremely harmful”.

It is understood when people who plugged in the USB drives and clicked on the fake offer, their computers crashed.

Victoria Police did not provide details on the type of malware on the drives, or whether victims were asked to pay a ransom as a result of runnning the malicious code on them.

It said “members of the public are urged to avoid plugging them into their computers or other devices” and anyone with information has been urged to contact Crime Stoppers.

Earlier in the year the American Dental Association was caught inadvertently sending infected thumb drives to its members while trying to update them on refreshed dental procedure codes. The Chinese-manufactured USB devices were sent to some 37,000 US dentists.

Researchers from the University of Illinois found that nearly half of people will plug a USB drive they have found on the ground into their computer, after tracking the fate of 297 devices they dropped on campus in a 2016 study.