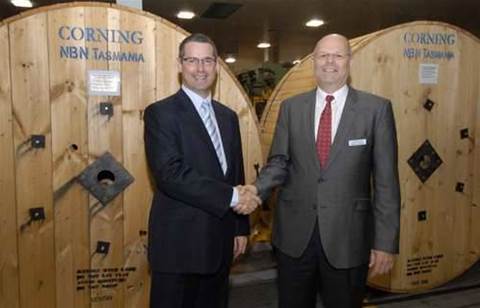 Corning Cable Systems has been awarded a National Broadband Network tender for the end-to-end supply of a fibre-to-the-premise (FTTP) network to connect approximately 5,000 Tasmanian homes.

The contract was awarded by Aurora Energy on behalf of NBN Tasmania.

He said Aurora would contract workers to make the connections between the power poles and houses.

"There is a bracket [attached to the house] that takes the cable tension and then [the cable] is routed typically into the roof cavity to the optical network termination device," Dittrich said.

Fibre construction techniques would be "similar" to those employed in the TasCOLT FTTP trial, which also used Corning technology, he said.

TasCOLT is a Tasmanian Government-funded $10 million trial of fibre-to-the-premises technology connecting around 1,000 homes in New Town, South Hobart and Devonport.

It followed a separate contract to supply 292 kilometres of fibre optic backhaul cable awarded to Corning back in July.

General manager of strategy and corporate affairs at Aurora, Martin Wallace, said the utility had no involvement in the plan.

"We are an agent for the NBN Tasmanian company to design, procure and supervise the build of the fibre network," Wallace said.