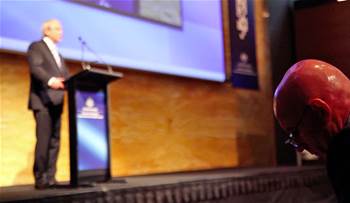 Almost live from the Broadband Future forum in Sydney.

This week's Crunch comes to you not-quite-live from the Federal Government's half-million dollar gabfest, the Realising our Broadband Future Forum.

The competitive structure of Australia's telecommunications industry is "less than ideal", according to Mike Quigley, CEO of the NBNCo, who said the National Broadband Network will help level the playing field.

The Prime Minister, meanwhile, told the delegation of "IT geeks" that Australia's broadband infrastructure was "not up to scratch".

And in a national exclusive, Senator Stephen Conroy reveals in vivid detail the current progress of his negotiations with Telstra, courtesy of a time lapse camera.

Also on this week's Crunch - the Telstra Global Operations Centre

Earlier this year, Munir Kotadia had a look around Telstra's Global Operations Centre in Victoria.

According to Michael Rocca, group managing director, Telstra networks and services, it was a world first.

"Back [in 1992] we had over 122 sites performing the function that this site performs today. It was a bold move ... to rationalise and consolidate all those together in one. It was a world first, nobody had attempted it before, and even today, Telstra is one of the few telcos in the world that has a facility like this," said Rocca.

Click here for a photo gallery of the Telstra GOC.