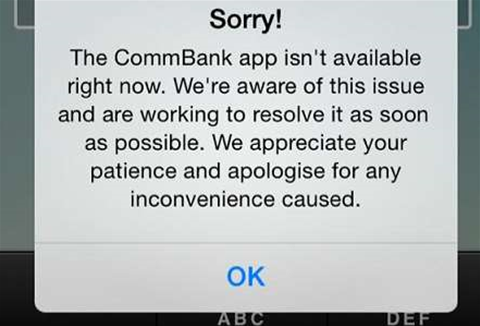 Commonwealth Bank customers have been unable to transact for several hours today owing to an unexplained outage.

Update 1:50pm: CBA Tweeted that all services "including ATMs, NetBank and EFTPOS" have now been restored.

Update 5:15pm: iTnews understands that the outage was caused by a switch failure inside one of CBA's Sydney data centres.

The bank has confirmed it is experiencing issues, but declined to pinpoint the cause.

“The Commonwealth Bank is currently experiencing system problems. We have identified the issue and we are working to restore services as a priority. We apologise for any inconvenience caused,” a CBA spokeswoman said in a statement.

Customer complaints about instability in online banking services began surfacing on social media just after 8:30am:

Would be rather nice for @NetBank or @CommBank to let us know that their online banking is actually down pic.twitter.com/LPxQleokiy

Customers also complained of issues with ATMs, EFTPOS and in-branch services. The CBA said it had no information on availability of these services as this story was published.

We understand some clients are having issues logging into the CommSec website. We are currently investigating and will update shortly.

A number of businesses and government organisations have reported that their services have been affected by the outage:

Council's Customer Service Centres can not process any EFTPOS payments at this time due to an issue with connectivity to Commonwealth Bank.

Please note due to a nationwide issue with the Commonwealth Bank, EFTPOS and credit card facilities are... http://t.co/OJ3L1caEfP