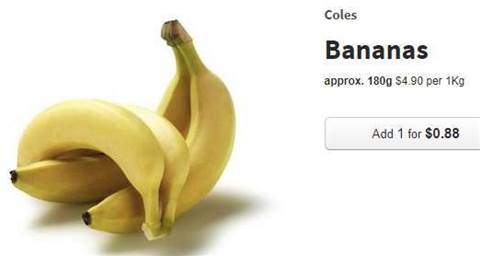 Online prices go bananas at $1 each.

Supermarket and liquor giant Coles has quietly upped the range of products available for delivery through Uber Eats into the broader grocery category – including staples like milk and bread – as it tries to find a way to stop online sales from cannibalising its profit margins.

Checkouts at Coles supermarkets, including Leichhardt and North Sydney, have now joined the initial trial of Uber Eats at Pagewood (Sydney), with checkouts last week festooned with in-store ads promoting the expanded service.

Aside from bread and milk, products include dairy, fruit, packaged meals, breakfast cereals and items like crackers, soft drinks and juice.

Opening-up Coles’ range to independent online delivery platforms is part of the supermarket’s pivot towards staying relevant to consumers who increasingly order-in ready cooked meals over cooking at home, shunning supermarkets in the process.

At last month’s financial results, Coles chief executive Steven Cain acknowledged what he called the “metro phenomenon” of Uber Eats, admitting it needed a response from the supermarket.

Calling the modern domestic trend to order-in both an opportunity and threat, Cain said Coles was exploring its meal delivery options, just as online sales chalked-up growth of 30 percent on a rolling 12 month basis, growth that for the most part dilutes profit margins.

Uber Eats could change that, though nobody is talking about what cut over and above the five dollars paid up-front by delivery customers is going from Coles to Uber.

On Monday night the ABC reported Uber Eats extracts around 35 percent from restaurants and food providores in its ambition to clip the ticket at both ends.

At first blush, Coles’ Uber Eats range does looked priced to rebalance margin dilution – with items like a simple banana priced at one dollar, plus the five dollar delivery fee.

And while you can get up-market breakfast cereals, A2 milk, frozen berries and the last minute family dinner favourite of a Coles cooked chook, budget breakfast staples like baked beans (this week discounted to $1.50) are yet to make it onto the convenience dining menu.

Even so, Coles’ restricted range is more likely to eat the lunch of convenience and impulse brands like 7-Eleven that has been heavily pushing its ready-to-eat food range alongside convenience staples like Slurpees and one-dollar coffee.

Take, for example, the “Netflix & Chill essentials” range that spans across premium ice cream, Tim Tams and upmarket chips to lure in those on a binge or prone to the munchies.

Coles’ tie-up with the biggest enabler of couch potatoes in Australia has also stolen a march on Woolworths which is also under pressure to make its online channel perform better in terms of profitability.

Coles has also struck a deal with AirTasker, where shoppers can put their shopping lists up for delivery bids.

Whoever rolls-up with groceries at the front door two things are clear: the first is that margin dilution is on the nose with both grocers and their investors; the second is that neither have found an accretive alternative to the drive-in, drive-out model.