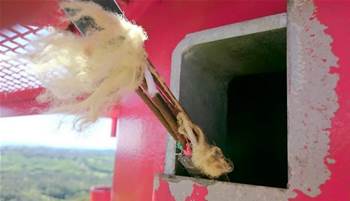 NBN Co is working to encase the ends of cables exposed on its fixed wireless sites after cockatoos stripped the steel braided sheathing, causing over $80,000 in damage.

The network builder is hoping a $14 plastic canister will encase the power and fibre cable ends and prevent cockatoos from stripping the cables to the point they are rendered unusable.

Cockatoos are a long-term problem for telcos; they infamously “munched” through a temporary overland fibre cable of Telstra’s in 2011, causing a sizable outage.

NBN Co’s build project manager for MND fixed-wireless capacity and expansion program, Chedryian Bresland, said in a blog post that the attacked cables were “spares” rather than active.

“The cockatoos are not targeting the active cables on NBN fixed wireless towers that are protected by a ribbed plastic casing, but rather the spare cables strung on the towers for future capacity needs,” Bresland said.

“Because the spare power and fibre cables strung on the NBN fixed wireless towers are not active, there is no way to know when damage has been caused to them until a technician is on site to upgrade or perform maintenance.”

NBN Co said it has so far uncovered eight instances of cables being wrecked beyond repair, with each instance costing the company $10,000.

However, there could be further damage because the condition of spare cabling at sites is not actively monitored.

“We’ve been going back to our sites and discovering all this damage on the spare cables we had been hoping to use on our towers,” Bresland said.

“They were damaged to the point of not being repairable, which has forced us to rip out the whole lot and completely re-run new fibre and power cables. That costs us about $10,000 every time we have to do that.”

Bresland said cockatoos used the cables to sharpen their beaks.