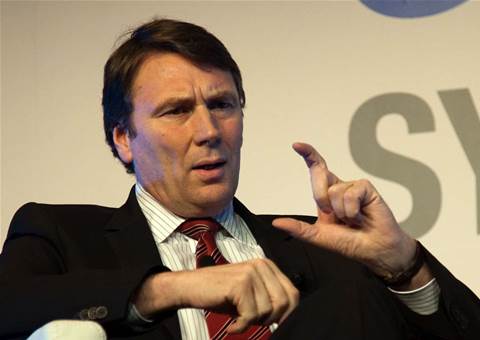 Telstra CEO David Thodey has said a future coalition government would not have to completely rewrite the contracts hatched between the telco and NBN Co.

Under the opposition's proposed policy - which it is yet to be fully detailed - the coalition plans to reconsider the NBN fibre-to-the-home rollout to 12 million homes in favour of a more technologically agnostic mix of existing copper and cable networks, with wireless and satellite components where necessary for rural and regional areas.

The coalition would boost speeds in copper areas with a fibre-to-the-node (FTTN) rollout, which critics have labelled as over overly expensive and a stepping stone to a wholly fibre network.

However, such a rollout is expected to happen much quicker than the ten years NBN Co currently estimates it will take to complete the NBN, speeding up the $4 billion in payments Telstra will receive as it migrates customers to fibre and decommissions its copper network.

Thodey told media and analysts that he had "little concern" about the policy, as currently publicly stated, and that it would potentially be "advantageous" to the incumbent telco.

He said the coalition's proposal would enable Telstra to receive contracted payments quicker and ultimately raise the net-profit value to the company.

But the contracts would not require a complete rewrite, Thodey said.

"There are some renegotiations in there because it's a different construct and remember there were the ducts going from the street into the house that were paid for, that would stay there [under the coalition's plan]," he said.

The contracts, first announced in June 2010, provide NBN Co with access to Telstra infrastructure and for the migration of Telstra's copper and cable broadband customers onto fibre.

The complexity in their negotiations led to a nine-month finalisation delay, however, ultimately pushing back the NBN rollout.

Thodey's comments support comments made by shadow communications minister Malcolm Turnbull, who has recently said that the $11 billion agreements between Telstra, NBN Co and the Federal Government would not require a complete renegotiation.

"Obviously you'd need an agreement with Telstra to use a portion of their copper [network] between the exchange and the premises [for FTTN]," he said.

"But the ... fact that the last 500m of the access network in some areas is copper doesn't make any difference to the way the NBN would operate."

Turnbull has to date been cautious to detail exactly what renegotiations with Telstra would be required, without seeing the full contracts himself.

"They're [the coalition] still going to need the backhaul, they're still going to need access to exchanges, so most of the infrastructure will still be needed. The Government package remains largely unchanged.. from what we're hearing at the moment, there seems to be no reason why the same construct can't remain in place," said Warren, who led the three-year negotiations around the contracts.

The payments Telstra will receive under current contracts to decommission the copper network and progressively migrate customers onto fibre would continue under the coalition policy, but would constitute a sale or lease of the existing copper network, rather than a decommissioning, Warren said.

Thodey told media that some of those payments would be made under the current contracts before the next federal election late next year, in areas such as Townsville, Rockhampton and Kiama.

Other areas deemed 'ready for service' by NBN Co 18 months before the election would also be eligible for customer migration and payments from NBN Co.

"Having done this for three years, I do not underestimate the complexity that can be driven into this," Warren said.

"Our plea to everyone would be just keep it simple, keep it as simple as possible.

"From our perspective, we can keep a lot of the elements in place. And that's what we're hoping because frankly we don't want to go through another three-year negotiation."