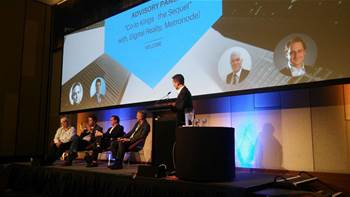 No signs of slowing.

Hyperscale and emerging cloud providers look set to fuel a second straight year of data centre growth in Australia, according to a panel of the country’s top co-location facility operators.

When the panel last convened at the Australian Cloud and Data Centre Strategy Summit in March 2015, they were locked in a race “to demonstrate available capacity and their ability to scale in order to be considered a potential host for cloud service nodes".

Equinix went on to tip US$97 million into a new Sydney build and US$28 million into a Melbourne expansion. It is widely understood to have attracted Amazon Web Services, though Amazon is unlikely to rely exclusively on co-lo space long-term.

This week, Global Switch said a “pre-commitment made by a leading cloud provider” would enable it to build out the last two phases of its Sydney East data centre. The second phase will come online in Q2 2017, and the rest will follow progressively.

“The hyperscale cloud providers are driving a lot of the demand,” Global Switch’s managing director for Sydney Damon Reid said on a panel discussion at this year’s Australian Cloud and Data Centre Strategy Summit, which is co-organised by iTnews.

However, Reid also said he was seeing demand from a second-tier of cloud providers, which could be niche Australian operators as well as newer multinational players that are still building out their footprints.

“We’ve been expanding in Australia as have many other [operators],” he said.

“We’re seeing a huge amount of up-swell in [demand in] Australia - in Sydney and Melbourne primarily - from cloud and cloud attachment.

“Bear in mind you can make an argument that two to three years ago Microsoft was not a tier one cloud provider, although they certainly are today.

“There are some significant players who are not hyperscale today but are building out infrastructure to get there, and they certainly have the resources to do it.

“The hyperscale providers tend to get the headlines but second-tier providers are growing at an extraordinary rate.”

All of the operators believed they were on the right trajectories to take advantage of the demand for co-location space, and they did not foresee demand problems in the intermediate future.

“Customer demand is very much the trend and I think that will continue throughout this year and next year,” Deutsch said.