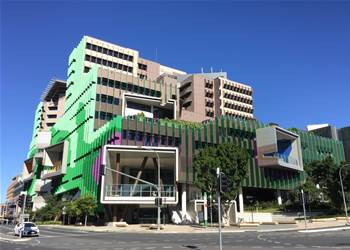 Children’s Health Queensland is embarking on a “health intelligence” program of work that aims to bring together real-time data streams to improve clinical and policy decisions.

Chief digital officer Alastair Sharman told iTnews that health intelligence - essentially an umbrella term for data analytics initiatives - is one of four “key streams of work” that the agency has driven over the past few years.

A large part of the momentum for digital transformation at CHQ came from the 2014 establishment of the $1.2 billion Lady Cilento children’s hospital in Brisbane.

“That was probably the catalyst for our major transformation as an organisation,” Sharman told iTnews on the sidelines of a recent VMware CIO forum in Sydney.

For Sharman, CHQ’s “digital journey” is about giving all hospital staff - along with staff based at community sites, in schools or delivering ‘hospital in the home’ services - access to real-time clinical information.

It had achieved this partially through the adoption of the integrated medical record (IMR), which is run by eHealth Queensland and provides network and end user computing services for health across the state.

But CHQ also runs a number of “local” systems for service delivery, and it has been upgrading and digitising those in tranches since 2014.

The last tranche of work, delivered in April this year, involved a project team of around 130 staff.

This included digitising medication management, the emergency department system, as well as systems for surgery, anaesthetics and care planning.

As a result, CHQ is running complete end-to-end digital services for clinical care, using standardised systems and some process automation, where possible.

The next major stream now underway is around what Sharman calls “health intelligence”.

“As we’ve digitised, we have a significant amount of our data being available in near real time,” he said.

“It’s now about how we then present that back so frontline clinicians and our clinical support teams and leaders can make more informed and more timely decisions”.

CHQ has stood up an on-premises data warehouse in its data centre located onsite at Lady Cilento.

It is taking feeds from a range of source systems, combining them and then presenting data through tools provided by Qlik, though Sharman noted they could have used any number of similar products.

“The lesson for me is not getting too caught up in selecting which platform is used, but selecting one and getting on with skilling our team in the actual use of that system,” he said.

Real-time analytics is expected to make a big difference to compliance and assurance activities around medication management, as well as to giving frontline managers actionable insights that led to performance improvement opportunities.

There is still some work to be done on the data warehouse and on CHQ’s ability to source data as quickly as it wants to see it.

Sharman said the agency is looking at its options to host the data warehouse in the cloud instead, both to improve scalability and resilience but also so Sharman’s team is “not spending our time managing the infrastructure”.

“My team is then focused on delivering the analytics piece which is the most valuable thing to the organisation,” he said.

CHQ is also working with internal data owners to get faster data feeds into the data warehouse, thus allowing it to move closer to its real-time data ambitions.

“We’ve got some really good partnerships with other areas of the organisation already.

“Our key focus and areas for improvement is we’re working in collaboration with other areas to enable us to have access to real time information, as opposed to getting some of the information on a 15 minute or 30 minute delay.”

“There are areas where a fair bit of navigation is required for us to actually get access to specific information.

“We don’t want to spend as much energy as we’re currently doing in that space, so I think over the next 12 months, a particular focus for us will be ensuring there’s repeatable governance processes for us to access data from source systems.”

Getting to that point should allow CHQ to explore some more advanced use cases for data, including around artificial intelligence.

“We’ve only just started to dabble in that but i think that’s going to be the next area of improvement for us,” Sharman said.

Sharman sees one opportunity for AI to be applied to referrals “coming in through the Queensland system … putting the intelligence into the lodgement and triage piece to get that referral to the right clinician in the right location as well to be more patient and family centred in the way we deliver services.”

“I think that will be an example over the next 12 months where we really want to use that sort of logic,” he said.

Sharman also sees an opportunity for CHQ’s data analytics to feed into better health policy decision-making at a statewide level.

“As a statewide service, we’re looking at how we use data to inform policy and also interventions from a population health perspective,” he said.

“We have really rich data on where are the opportunities to improve health and wellbeing and can look at that from a 10-15-20 year viewpoint.

Sharman said CHQ is also intent on harnessing “geospatial capabilities … to demonstrate the health and wellbeing of certain populations.”

In addition to consuming some standard services such as the integrated medical record, end user computing and network services from eHealth Queensland, CHQ also runs its own “local” services from within its own data centre.

The data centre is heavily virtualised with VMware. However, its future role is uncertain as CHQ considers how to take more advantage of cloud-based services.

“We already have a range of SaaS products and we’re also looking at the use of a range of PaaS solutions,” Sharman said.

“As we look at a tech refresh in the coming years, we’ll look at what the right balance is between on premises and cloud-based services.

“How we extend the data centre to support cost optimisation, agility, and reliability and resiliency of our services is definitely in our strategy.”