Chambers: We were fat, but we'll kill Juniper 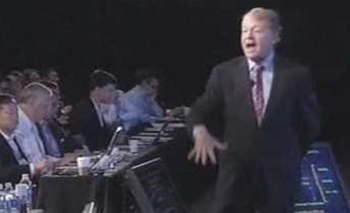 HP too, but remains cautious on Huawei.

Cisco CEO John Chambers has come out swinging at the troubled company’s annual investor conference on Tuesday where he sledged US rivals and outlined video and mobility as the vendor's key focuses.

“You’re going to see us go after Juniper. Juniper is the most vulnerable I’ve ever seen them. They’ve spread themselves too thin in terms of focus on service providers and their movement in the enterprise,” said Chambers, adding that its enterprise teams “don’t understand networking”.

Chambers attack on Juniper followed the launch of a Cisco campaign this week, in which it highlights its rival’s supposed failure to deliver a range of data centre switches and mobile edge routers.

“[Competitors] were pretty tough on us when we first tripped. But you never do anything to somebody unless you’re prepared for them to do it to you. And we're going to have fun.”

While HP, Avaya and Juniper would be left behind, he was more cautious about Chinese networking giant, Huawei.

“Huawei is going to be a tough one. Those first three, I think we’ve got a good chance of just completely distancing them and just leaving them behind.”

But Chambers suggested Huawei's ability to compete outside China was because it did not need to make profits there thanks to those it generated in its home territory.

“You can’t let them go and make all their profits in China and then go on and make no profits in the rest of the world,” he said. His answer was to take the battle to China.

Chambers conceded Cisco was sluggish to respond to competition after it “tripped”, but argued﻿ the headcount reduction and operational simplification program now in its 150th day would deliver improvements.

“We were fat,” said Chambers. “I mean, we had an extra four or five inches around the waist line. Not one, but four or five. And that slowed decision making down and we got away from the basics.”

Chambers took the opportunity to counter HP’s claim that its UCS computing equipment would fail.

Video would become the cornerstone of Cisco's strategy to drive demand for its networking kit. "I'm going to go out on a limb here and be very direct. I think video will be the platform for all communications in IT."

Chambers defended Cisco's acquisition of the Flip video consumer business, which it shuttered in April ahead of its 6500 headcount reduction.

"But by the way, as the CEO, if you’re going to miss one, you want to miss $500 million not $3.3 billion,” he said, referring to Cisco's earlier (more successful) acquisition of Tandberg.

“There is only one other company [that] acquires well and that’s Oracle.”