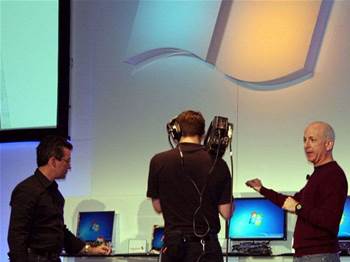 Microsoft has demonstrated Windows and various Office applications running on ARM processors for the first time at CES in Las Vegas.

The shift towards the ARM architecture is part of Microsoft's plans for the next generation of Windows, Microsoft's Windows chief Steven Sinofsky confirmed, although he was very circumspect on the detail of "Windows 8".

Microsoft showed the full version of Windows running on four different systems-on-a-chip: one based on Intel Atom and three based on ARM processors, namely Qualcomm's Snapdragon, Texas Instruments' OMAP and Nvidia's Tegra.

Aside from the operating system itself, Microsoft also demonstrated adapted versions Word, Excel and PowerPoint running on ARM-based platforms, although Microsoft conceded that there's a great deal of work to be done with wider application compatibility.

"It's definitely the case that x86 programs don't run on ARM," said Sinofsky. "We'll have a lot more to say about apps and development opportunities down the road."

However, he suggested that application and device compatibility won't be a major barrier.

"We've made a native version of Word running on ARM," he boasted. "We're printing using the normal Windows architecture. It involved a small amount of work from Epsom running on a new class of driver."

Sinofsky was very guarded on precise details of the next version of Windows. The demonstrations used the Windows 7 user interface, and the Microsoft executive refused to discuss release dates or version details. It's not clear whether Microsoft will develop the x86 version of Windows alongside the ARM version or as separate projects.

Sinofsky even refused to confirm whether what was being displayed was Windows 8.

"I didn't say Windows 8, I said the next generation of Windows," he replied, when asked to clarify what was being demonstrated.

Sinofsky was keen to play down the demands Windows places on hardware, noting how modern smartphone specifications are similar to the minimum system requirements for Windows 7.

"It's a little early to talk about the system requirements for the next generation of Windows," he added, but said that the company was attempting to repeat the parsimony of Windows 7.

While moving to the low-power ARM architecture is clearly designed to give Windows a much needed boost in the tablet market, Sinofsky refused to be drawn on specific device plans.

"Today is when we start to kick off the dialogue with our partners who make these devices," he said.

However, he was very clear that there would be no crossover with Windows Phone 7, ruling out the use of Microsoft's new smartphone OS on tablet devices. "[Windows] Phone is uniquely focused small form factor," he said. "Small screen is Windows Phone, and these [tablet] screens are Windows."

Got a news tip for our journalists? Share it with us anonymously here.
Copyright © Alphr, Dennis Publishing
Tags:
armhardwaremicrosoftonrunningshowswindows