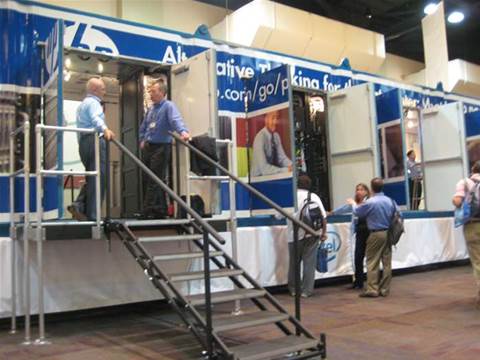 Regional NSW managed service provider Verb IT is one week away from completing the fit out of the first container data centre in Australia based on HP's POD technology.

The concept of the container data centre - promoted by Sun and Dell and used by Google and Microsoft en masse - is fast becoming a popular form factor for power-hungry fit-outs, with container park builds underway in Canberra (via DataPod, backed by APC); Adelaide (via Tier 5, backed by Dell) and in Melbourne (via GreenEdge Data.)

HP, which announced its pod designs back in mid-2008, appointed Western Sydney-based Premier Business Partner Triforce as exclusive distributor for its POD systems and has now made its first sale.

The customer - Verb IT - already boasts a data centre and NOC (network operations centre) in a business park in Wyong, two hours north of Sydney, from where it has been providing a range of managed ICT services for some six years.

Verb IT owns a large parcel of land in the business park and plans to expand its data centre business, which it calls Verb DC using modular pod fit-outs.

Verb IT director Christopher Clifford said he spent some 20 months researching the various pod configurations on offer before deciding to take the HP route.

The 20-foot pod data centre being installed at Verb IT holds 50U (rack units) of 19-inch wide racks and will be powered at up to 27 kW on every rack. It will come pre-equipped with HP blade servers, SAN (storage) and tape library backup.

Clifford said he expects customers to start on 5-7 kW per rack and gradually use more power.

He expects the power available to be such that Verb IT could serve up to 5,000 seats of managed service customers from servers housed within a single rack.

"This one 20-foot pod will be able to power the equivalent of 400 to 500 square metres of regular data centre space," he said.

The business park is located close to a power substation for grid power and is connected via the IP-VPN MPLS networks of Telstra and Optus.

The pod data centre will use Matsu chillers and MGE UPS. The data centre will be Tier II rated at launch, but Verb IT plans to hook up to a second substation and build a gas turbine power generator on-site in the near future to move to Tier III redundancy.

"Our focus is to get to tri-gen power," Clifford said. "We want to create a truly sustainable data centre."

Clifford expects to be adding a second 20 square foot modular pod in the near future and has enough power and cooling on-site for a third. He said each additional pod should only take 12 weeks to kit out.

Clifford said he chose HP for its impressive power efficiency rating. The vendor advertises that its POD data centres can achieve a PUE of 1.25 (ratio of how much power used in a data centre is actually used by the computing equipment rather than cooling etc).

"We took a fairly pragmatic view," Clifford said. "Building this facility in 14 to 15 weeks might be a record, but I spent 20 months of rigorous analysis on this."

Clifford was also impressed with the expertise HP contributed to the project. Representatives from EYP Mission Critical Services - acquired by HP and rolled into HP Services with EDS - provided a project manager for the 14-week build.

HP also flew in senior engineers from the US and UK, primarily to pass on skills to local HP staff for future pod deployments.

Clifford said the data centre will be operational by the end of the week, will test equipment over the following three to four weeks and begin migrating customers into the pod by the first week of September.

He expects the data centre will prove popular for organisations in Sydney and Newcastle wishing to have disaster recovery services available in a geographically disperse regional area.

Clifford said the Telstra and Optus links provide what he describes as "effectively live state" connectivity to Sydney - with maximum latency of 24 milliseconds.

"This is very big news for the Central Coast, and for the business corridor between Sydney and Newcastle," he said.