CBA, Telstra team up for hackathon 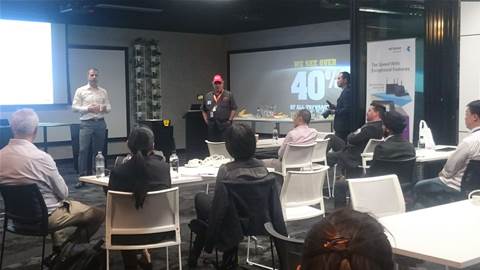 Steel and Arrigo talk the devs through the process.

The Commonwealth Bank and Telstra have teamed up to offer their developers a three-day hackathon aimed at solving problems in the property buying process.

Housed within CBA's innovation lab in its Sydney headquarters, 50 developers from the telco and the bank will co-locate from Wednesday to Friday in teams to create solutions to some of the pain points in buying a property.

The event is being lead by former Microsoft evangelist and Telstra API lead Frank Arrigo, and CommBank's wealth and retail CIO Pete Steel.

The aim is for the teams to create prototype applications - using the Kony application development platform - to produce a minimum viable product that can be quickly developed to scale.

The bank's cardless cash product is one example of an initiative arisen from a hackathon event.

Details of the final solutions will not be made public, as CBA is hoping to implement the best ideas within its business.

The brief is not to replace the home loan process - the aim is to develop add-on solutions that reduce frictional pain points, Steel said.

"It could be any part of the value chain. Initially, it could be trying to find the right home as well," he said.

One in two people use mortgage brokers to find the right home loan, he said, indicating the process isn't the easiest experience to go through.

One example of the type of innovation Steel - as a member of the judging panel - is looking for is an existing function within the CBA app that allows users to take a photo of a house and receive its valuation.

CBA and Telstra have grouped business and technology staff together as part of the hackathon to bring different perspectives to the problem.

The event will run until tools are downed at 2pm Friday.

The teams will then have just two minutes to pitch their prototype product to the judging panel in the hopes of winning both a prize (various Samsung mobile phones and tablets) and the ability to bring their solution to market.