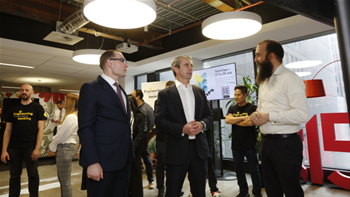 Targets up to 500 technology specialists.

CBA has opened a technology hub in Melbourne, its second nationally, which will ultimately house up to 500 software developers, cloud engineers and cyber specialists.

The bank has partnered with Monash University and RMIT to offer software engineering students job opportunities across the cloud, data, analytics and software domains

Hopper told iTnews that Melbourne "has a depth of tech skills that we need to access” as the bank seeks to “rebalance how much work we do inside versus using partners”.

The hub already has 100 technology specialists and will look to “grow by 400” over the next few years, he said.

“We're targeting up to 500 [workers] if the skills are there. That’ll take us a couple of years to get there but definitely that's our plan,” Hopper said.

Hopper said CBA is “strategic on who we put where” based on the skill set available in the market, with the bank so far keen to fill cloud, DevOps and platform engineer roles, as well as hire “engineers who build things to make other engineers happier and more efficient.”

“That's actually an area where the tech giants and tech companies have invested a lot over the past couple of decades," he said.

“We're making major investments as well in our engineering experience and making the people who build the products as efficient and as happy as possible.”

Hopper anticipates this new space will grow faster than the site at Lot Fourteen, as the bank is taking a “taking a long-term view” in Adelaide given the difference in population and access to tech talent across the two cities.

“Melbourne has a very mature established tech sector, lots of cyber experts, lots of data scientists, and amazing cloud engineers that we believe that we can offer opportunities to right now," Hopper said.

“Melbourne is probably going to grow a bit faster than Adelaide.”

For Lot Fourteen, CBA’s ambition is to reach 150 technology specialists within five years.

Since its February launch, Hopper said Lot Fourteen has around 20 workers, with CBA “looking to partner with aa lot more with the educational institutions down there now.”

CBA intends to add to its tech hub portfolio across Australia - beyond Melbourne and Adelaide - which could potentially give the bank “access to people who may live more regionally” and will “probably look all across Australia to work out where the skills are.”

Hopper said the next hub will “definitely" always be close to educational institutions” with hopes to partner with “the likes of TAFE”.

CBA chief data and analytics officer Andrew McMullan told iTnews that ‘there's a shortage of over 1 million people across the planet today” with data science or machine learning skills and expertise.

“The number of experiences and services we are providing to our customers now is just growing exponentially," McMullan said.

“To do that in a really relevant and personal way, we need to have the best scientists who are building the decisions that we make on what services or experiences or offers to provide to our customers, and they just don't exist.

“So, we've got to be in the right places where those skills are - and Melbourne definitely is one of them.

“We've got to invest in our own people to train them and bring them into that new area or a growing area of expertise.”

McMullan said CBA is “very committed and convinced that Melbourne is critical to how we're going to be able to do that, particularly as we want to stay ahead of everyone else.”