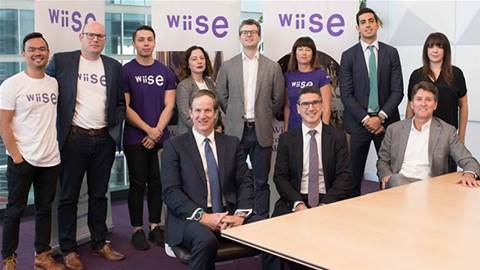 KPMG Australia is already facing internal pressure to convert the software startup it co-founded with CBA and Microsoft into a globally repeatable model.

That pressure is likely to continue as the startup, called Wiise, was held up as an example of the kinds of new partnerships that Microsoft wants to strike, at its annual Inspire partner conference in Las Vegas this week.

Unveiled in mid-May this year, Wiise is intended to be a business management suite that integrates closely with CBA business banking.

KPMG Australia’s technology advisory national leader Richard Marrison said his organisation had already faced tough questions from other big Australian banks about its decision to cozy up with CBA on the project.

“The first thing we had to do when we launched Wiise [back in May] was field calls from all our other big banking clients in Australia saying ‘why didn’t you do this with us?’,” Marrison said at the Inspire conference.

Marrison didn’t reveal specifics around why CBA was chosen, saying only that it was a “conscious decision” and that CBA and KPMG were long-running partners.

But the calls to replicate the model have also come from broader afield.

“In terms of the global perspective, we’ve had several discussions in the last couple of days with our global colleagues within KPMG and it’s fair to say that the demand is incredible, much more than we ever thought it would be,” Marrison said.

“This concept resonates globally. It’s responding to an issue that is global.

“Every institution has an issue about connecting better with its customers in this part of the market, but I’ve said to everyone we need to get it right in Australia first before we take it offshore. We’ve got to industrialise the model.”

KPMG said in a statement that "global rollout plans [would be] under development in 2019."

Insulating Wiise from its founders

Bringing together three large organisations to create a software startup had been challenging, executives from KPMG and CBA agreed.

“The spirit in which the partnership has been struck and the way it continues to operate is very collegiate, very collaborative.

“We’ve had a few challenges along the way which you’d expect in three large institutions - many internal stakeholders, different operating rhythms within those businesses, normal pressures around funding constraints and resource allocation.

“It’s been up to the various members of the different companies to evangelise inside their [respective] organisations, bring that feedback back into the partnership, and then work together to make sure we reach a point of delivering real value for the customer.”

Marrison said that one of the challenging elements was putting commercial and legal concerns to one side to allow the project to progress relatively unencumbered.

“Whilst we’ve all tried to operate as a startup as part of this, we are part of big global corporates, and you need to be very careful that you don’t get bogged down in the commercials and legals too early in the process, because you will spin,” he said.

“We wanted to make sure we could work together, we had something of value that we could create, and we also tested the market that our customers actually wanted it as well.

“Until we got to that point, we said we’re not going to get too worried about the commercial construct that goes around this in working with three large organisations.”

Wiise is based in the fintech hub Stone & Chalk, and Marrison saw that as essential - again to prevent any of the three large partners overly influencing its direction or operations.

“We’ve actually pulled the teams out of their day-to-day, and that’s not just in terms of doing the work but where they’re physically located,” Marrison said.

“One of the first things we did was pull an integrated team from all three organisations and say ‘we’re not going to host them in any one of our orgs, we’re going to colocate them in a fintech hub in Sydney’.”

An agile model that works

One thing that is clear about Wiise is that CBA - and KPMG to an extent - hope that the culture of the startup can rub off on workers that sit in other parts of the bank or professional services firm.

As banks look to adopt enterprise agile in greater numbers - that is, apply agile methodologies across the organisation, Wiise is early proof of what might be accomplished under that kind of cultural shift.

“We do bring senior stakeholders in and they call out not being able to identify who is from which organisation,” CBA’s executive manager of partnerships Elliot Cousins said.

“We’re not burdened by any of the big organisational constraints of doing it in any one of our particular businesses.”

Haggar noted that the bank’s risk function had been an early beneficiary in this respect.

“We’re bringing different parts of the organisation into this ecosystem where they haven’t traditionally played,” he said.

“A great example of this would be our risk management colleagues.

“Normally in banking we operate in a very traditional way.

“We’re forcing our risk colleagues to think differently with this type of work we’re doing so we’re educating other parts of our respective organisations in how to work agile and in a more startup environment.”

Marrison said KPMG had similarly taken its own executives into the Wiise startup.

“To be able to bring our executive team through that, [it’s valuable] for them to see it really feels - and is - different,” Marrison said.

Wiise is yet to see the light of day - it was originally intended to appear this month but Haggar confirmed at Inspire that it is now not due until August.

It has been reported that Wiise will be made available on a subscription basis, as software-as-a-service.

That would make it conducive to being offered directly to small-to-medium businesses that bank with CBA.

However, CBA said that one of the key reasons they had decided to partner with Microsoft on the project was to get access to Microsoft’s partner community.

“The Microsoft distribution partner network ... has been a key part of the decision making of going with Microsoft,” Cousins said.

“The partner network [Microsoft has] means we can get this to a lot more customers than we could individually even as two organisations.”

Marrison said that KPMG and CBA had also “done a lot of direct engagement with prospective customers” pre-launch to find out “what’s important for them, what resonates with them.”