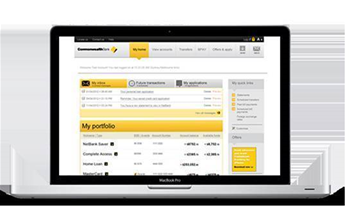 The problems emerged just after noon AEST on Monday, with users reporting difficulties viewing credit cards and loan account balances on NetBank and in the CommBank app.

There are also isolated reports of issues with transactions at point-of-sale (POS) terminals, including with cardless cash, and making transfers between accounts.

CBA acknowledged the problems in a tweet just before 1:00 pm, followed by an alert warning customers of the outage.

“We’re aware that some customers may be having issues viewing cards and loans in Netbank and the CommBank app as well as completing payments at CBA POS terminals,” it said.

“We’re sorry for disrupting the start of your week - we’re looking into this as a priority and will keep you updated.”

CBA said “viewing accounts and statements for some home loan, credit card, transaction and savings accounts in the CommBank app and NetBank” could be a problem for customers.

By 7:10 pm, some services had begun returning to normal. All other services, including payments, were back online by 8:45 pm - almost nine hours after the problems began.

“Services are now operating as normal, with accounts and statements viewable again in the CommBank app and NetBank,” CBA said in an update.

“Payments are also available. Customers looking to make their credit card payment are now able to do so via the CommBank app and NetBank.”

The problems are the first major outage to be experienced by the bank since last October, when NetBank users encountered intermittent issues accessing their accounts online.

Some in-branch functions and some inbound call centre services were also said to have been impacted.