The Commonwealth Bank of Australia (CBA) has revealed it is close to completing a project to migrate 9,000 virtual machines to a refreshed private cloud and will consider its new ‘One Cloud’ platform to replace workloads now running on IBM P-series and mainframe hardware.

Speaking at VMworld 2018 in Las Vegas, CBA head of cloud Chris Kelada explained that Australia's largest retail bank has refreshed its private cloud because of the pressing need to improve responsiveness for developers and to deliver self-service capabilities for business units. 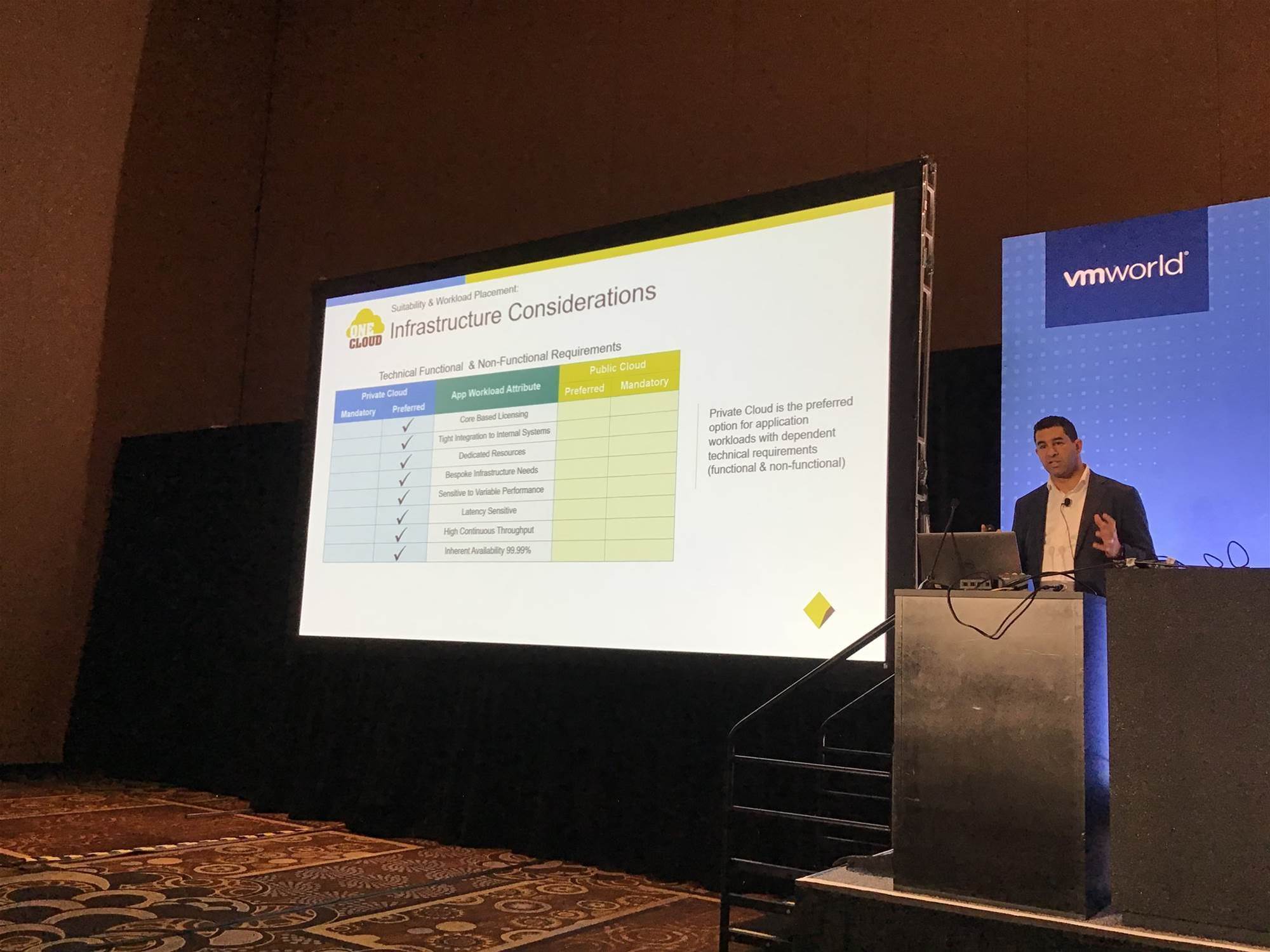 CBA kicked off its massive initial private cloud effort around 2010, arguably dragging much of Australia's retail banking sector along for the ride by way of rivalry for competitive advantage.

The shift allowed the institution to conspicuously dial down its cost to income ratios using the technology, a move that led analysts to question what other banks were doing.

Although CBA has enjoyed substantial uplifts in efficiency and accelerated product development speed from its previous cloud effort, a renewed push is now on to stay ahead of the pack.

Kelada did not mince words about the need for change on the cloud front.

“We now really need to lift velocity,” Kelada said. “That centralised provisioning model is not fit for purpose into the future.”

The bank used centralised provisioning because its previous private cloud was, Kelada said, really a “federation of private cloud environments”.

It’s since adopted Dell EMC hardware tended by VMware’s software-defined data centre platform plus VSAN virtual storage, and now has one private cloud that has virtualised over 95 per cent of its x86 servers.

Kelada said extensive use of automation made both options possible, and potentially faster than the bank could deliver in the past.

In a presentation titled “Leading Financial Services Transformation in a Multi-Cloud World”, Kelada also revealed that CBA already runs some mission critical apps in the public cloud - in fact in two of them.

The CBA's cloud chief said the bank runs workloads in both Azure and Amazon Web Services in an active/active configuration that gives it resilience even if either cloud experiences service difficulties.

Self-service provisioning to either cloud is also possible, Kelada explained, observing that policy-driven automation is deployed there too. This means that users can’t implement systems that don’t meet CBA’s security and governance requirements.

Kelada also revealed that CBA has done its sums and found that a private cloud is nearly always cheaper than a public cloud.

He explained the matrix (depicted above) the CBA uses to determine the few use cases in which private cloud is more suitable for a workload on the grounds of cost or governance. 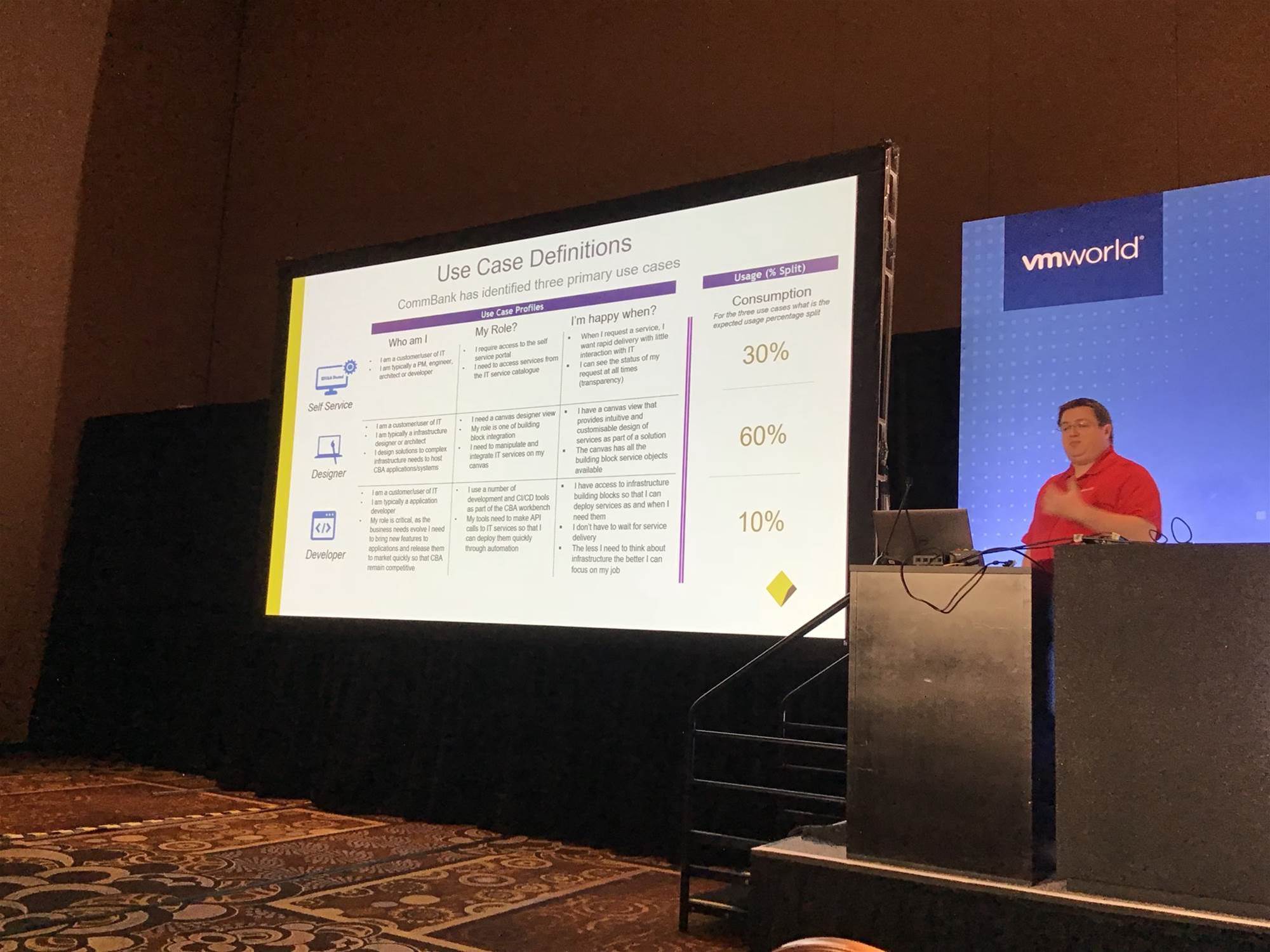 Few workloads make the cut for public cloud deployment - and usually only because they need burst capacity or platform-as-a-service performance. Applications that involve regulated transactions, sensitive data or need low-latency performance nearly always remain on-premises. But the Bank expects the public cloud portion of its hybrid cloud will take on more workloads, with the potential for swift uptake.

That combination of concerns means the CBA will keep most applications in-house for now.

Yet its new cloud will also change its software estate in two ways.

Kelada said that CBA is now sufficiently confident in using hybrid cloud that it is considering containerised software development in the hope that doing so will allow it to decompose monolithic applications to make them more flexible. Containers and other cloud-native techs will also see the bank move to use more public cloud, especially for internet-facing applications.

He also said that the bank wants to make x86 its standard as far as is practical and is open to the idea of moving applications tied to mainframes and IBM’s P-series hardware to x86 over time.

ITnews understands that P-series hardware is used at CBA for tasks including credit card transaction processing, so any move would represent a very significant shift indeed.

Simon Sharwood travelled to VMworld as a guest of VMware.