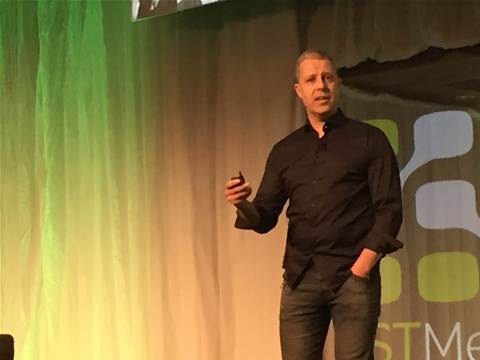 The Commonwealth Bank of Australia’s chief digital officer and acting head of cyber has poured cold water on the threat of Australian retail banks losing business to Facebook, Apple and Google, questioning whether US companies are really prepared to carry financial risks on their balance sheet.

Delivering the keynote address to the FST Future of Financial Services conference in Sydney, Pete Steel, CBA’s executive in charge of digitising customer experience, said the real disruption to banks stemming from platforms was occurring in China where the government had allowed banks there to be relegated to the status of 'rails'.

“Whatever they will do, they will certainly start in the US,” Steel said of the so-called FANGs gang that has US institutions worried they will lose customers to the likes of Apple Pay or Facebook transactions.

“Definitely the Googles, Amazons, Facebooks – some of them are probably in the room – they will participate in financial services in some way.

“Will they become banks and want to have risks on their balance sheet? I guess not,” Steel said.

“They should be attempting to turn the rest of their industry into rails and the engagement over the top and monetise that.”

The comments underscore a growing sentiment in Australian bank tech shops that the great fear of platforms eating their business through disintermediation have been overcooked as a threat, especially from the US where tech-based entries into Australia, especially around payments, have struggled.

That’s not the case in China where attempts to penetrate the huge market by US majors like Visa and Mastercard have been eclipsed by the likes of WeChat and Alipay who have fused together social media, payments and shopping in a hybrid model that has bypassed payment cards.

"China is a fascinating market," Steel said. "I think it is much more progressed than the US in many ways. I would say it’s less fragmented.

“You see WeChat and some of the leaders, they really have relegated some of the banks there who are slower where there was a regulatory white space for them to get into.”

Steel said platforms in China had now “relegated the banks there to rails; providing the balance sheet, the risk – and they own the customer engagement.”

This was the more likely outcome the likes of Facebook or Google would try for, rather than the business of taking and lending money in the way institutions have traditionally done.

“I suspect that US big techs would like to move to variations of that model. But at the end of the day, for me, it’s all about customer engagement," Steel said.

“If we fail in the sort of direction… then they probably have the right to own that customer engagement and monetise that."