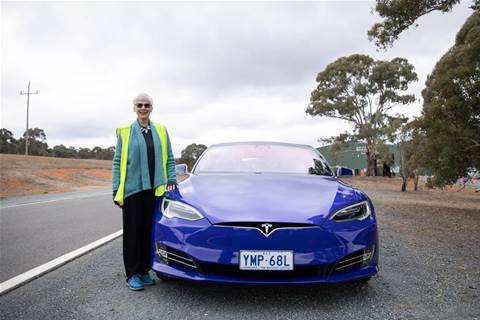 A trial of semi-autonomous vehicles in the ACT has yielded promising early results, prompting an extension of the project to look at how the technology can help older drivers safely stay on the road for longer.

The original study, which launched in April last year, examined how human drivers in and around Canberra would respond in an emergency situation where they would need to quickly take control back from a car with an autopilot function.

The trial’s original partners, The University of Canberra, the ACT Government, and Canberra-based computer vision company Seeing Machines, have now turned to trials with septuagenarians in Teslas to test how they respond to a car that can partly drive itself.

The 23 participants were given instruction sessions on how to use the Tesla Model S, which was fitted out with cameras to track their eye movements and responses behind the wheel.

As the national average age continues to creep up, autonomous and semi-autonomous vehicles could be a useful tool in keeping older people mobile, connected and active.

“When older people stop driving, they might not be able to connect socially as they did before, which could lead to a host of health problems,” said Dr Stephen Isbel, an associate professor of occupational therapy at the University of Canberra and a collaborator on the trial.

“They might not be able to go to the shops or to church which can be important to them and a semi-autonomous car is a tool to keep them in touch with their community.”

The ACT has been exploring the issue of the last three years, with Advanced Technology and Space Industries minister Mick Gentleman saying the latest trial will help the territory understand how it can capitalise on the technology.

“New technology will be fantastic for people getting a little bit older, if we’re looking at the ability for them to be able to keep in touch with their family and friends, then automated vehicles can be a real opportunity for them in the future,” Gentleman said.

While the full results of the trial won’t be released until November, anecdotal feedback suggests the participants were keen to further try out the technology on the open road, rather than just on the closed track at the Sutton Road Driver Training Centre at Majura.

“Almost all of them have said the automatic functions are pretty easy to use. It can be a bit unnatural for the car to be driving itself, but they were ready to take control of the car at all time,” Isbel said.

One of the study participants, Marie Keir, has been driving for over 50 years but said driverless vehicles would help keep her independent and in touch with her social connections as she got older.

“These cars would be good as people’s reaction times slow fractionally with age,” Keir said.

“Even a fraction of a second can be very important with the road conditions these days. I think with the help of a semi-automated car, I could extend my driving life.”