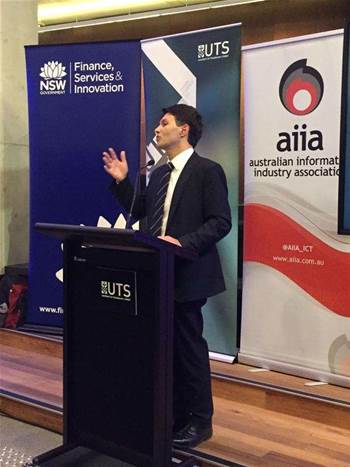 Minister hopes analytics will be a lasting legacy.

Is big data the answer to NSW’s trickiest policy conundrums?

Innovation Minister Victor Dominello certainly thinks so, and he is willing to pin his reputation to a data analytics organisation he thinks could become the lasting legacy of his time in parliament.

The former lawyer and now avowed data geek is putting all his political weight behind a foundational data analytics centre (DAC) that will help the public sector build policy informed by patterns and predictions, rather than the gut feelings of bureaucrats.

He told iTnews he won’t shy away from using new powers at his disposal if public service obstinacy stands in the way of seeing his data driven vision played out.

The establishment of the DAC came with new laws enabling the Minister to demand agencies hand over required data sets within 14 days of a request.

While Dominello said he hasn’t had to use the “sledgehammer” approach to achieving agency co-operation yet, he won’t hesitate if it means furthering one of his pet projects.

He could be “getting close” with one particular recalcitrant agency, he conceded, but “not yet”.

“We don’t want to be too tough but if [DAC boss Ian Opperman] says he’s come to the end of the road I will definitely be seeking approval from the premier to use those powers," he told iTnews.

In meantime he believes the existence of coercive powers is enough to have the desired effect on public sector culture.

“If you asked me before the legislation passed I would have been pulling my hair out. I was getting letters from agency lawyers citing confidentiality, privacy, a whole lot of reasons not to sign on to an MOU," he said.

“That barrier now, instead of being Mount Everest, is just a small molehill”."

The decision to legislate originated in pre-DAC consultations with data scientists, and in particular one lengthy late night phone chat with Mike Flowers from the New York Mayor’s Office of Data Analytics (MODA).

Flowers, according to Dominello, said he wished he could compel data sharing in his own jurisdiction because that would be “the game changer”.

But are game changers really on the menu in NSW?

Or will the DAC’s algorithms simply repeat to the state’s lawmakers the same things bureaucrats have been telling them for years - that social and economic conundrums are nightmarishly complex and require nothing short of money, patience and willpower to fix?

“What we are seeing is problems arise, whether it is drug abuse or other social issues, that are a lot more complicated than they used to be. There are just so many influences playing on them,” Dominello said.

“And data is starting to unlock those solutions.”

He said the DAC’s current work on rental overcrowding and the rise of slumlords preying on international students was a case where simply investing in more social housing wasn’t the solution.

“It is not just a housing issue because many international students that might fall vulnerable to these slumlords don’t know there are better options available,” he said.

“They just see and ad in the paper and go with their friends.”

Instead, the DAC is using utilities data, council zoning information and Fair Trading complaints to drill down to the premises most likely to be housing packed-in tenants, rather than sending government workers on a door-knocking wild-goose chase through Sydney suburbs.

“That is where you can use data to craft better solutions with maybe even less money,” Dominello said.