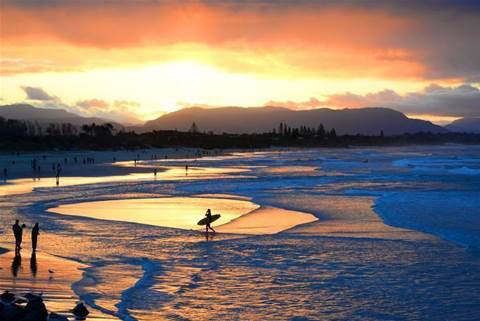 Zoho says pass the avocado as it hires 20 setting up shop in Northern NSW.

Or the digital hipster hub and 1980s office style retrofit capital of Surry Hills, where even the supersize rats that frequent the laneways have an over confident start-up attitude.

When it comes to attracting tech talent with a hot location, you have to go north and lose the shoes.

These days, the upmarket beachside region of Byron Shire is where the serious head office action is at, especially if you’re trying to attract loyal IT skills seeking a sea or tree change – at least according to global stack provider, Zoho.

The CRM and productivity software vendor (among many other things) will today reveal it’s picked Byron Bay in the of NSW to set up its Australian head office, a location certain to get wax heads and fans of batik and bongo drumming applying for positions in droves.

But as recreationally appealing as Byron sounds, Zoho’s new ANZ managing director Timothy Kasbe told iTnews the location was picked as part of the privately-held company’s philosophy of setting-up shop in locations outside of capital cities to spread wealth and reduce cost pressures for employees.

Kasbe said the company will initially be putting on 20 people in Byron as the business “puts down roots” to cater what he said were the scale demands of a customer base of tens of thousands in Australia and New Zealand.

While residential property prices, even with recent falls, are notoriously high in Byron, Kasbe said there was still plenty of value to be had in surrounding areas within easy commuting distance. In terms of commercial premises, Kasbe said Byron was substantially ahead on the value front.

A key reason Zoho is setting up a physical shop down under is it’s also building a cloud here, on its own infrastructure, in part to satisfy data sovereignty requirements incumbent on bigger customers.

Zoho’s founder, Sridhar Vembu,  said there were two broad goals for the company at present.

“We are seeing the adoption of the Zoho suite in large enterprises. We are also expanding our geographic footprint in a big way over the next two years. Our expansion into Australia is a crucial part of our global expansion and we are committed to serving Aussie customers with a strong local footprint, including a cloud data centre build-out.”

Equinix gets the local data centre business, and was predictably thrilled.

Though not as thrilled as local business chiefs, council and the obligatory politician attempting to ride on the coat tails of the investment ahead of a state election.

“Having a company of Zoho’s size and reputation choose Byron Bay is a major win for the North Coast and for communities right across regional NSW,” said Parliamentary Secretary for Northern NSW Ben Franklin, gleefully snatching a win from recidivist tech IT HQ ribbon cutter and perennial residential overdevelopment opponent Vic Dominello.

“The NSW government has been working hard to create the incentives, infrastructure and support that regional communities need to attract international business of the calibre of Zoho,” Franklin beamed.

Tub thumping aside, Frankin has a small point.

As smaller communities gradually get better connectivity and comms infrastructure, the investment options for inbound companies diversify as they look for lower overheads and a point of difference to attract staff.

Just imagine the possibilities. Soon, you could enjoy a herbal tea at Oracle’s office in Nimbin or an organic lentil burger at SAP’s hub in Mullumbimby. And that’s before you trip over the half price mangos and avocados.