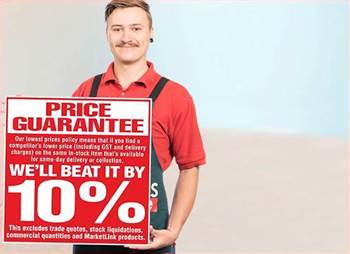 Bunnings Warehouse boss Mike Schneider has hammered suggestions the hardware colossus could be forced to dump its famed ‘lowest prices’ guarantee to consumers because of the retailer’s entry into the consumer technology and smart homes sector.

In a testy rebuke to analyst speculation that competing against JB HiFi, Harvey Norman and Amazon could force a retreat on price competition, Schneider this week dismissed any proposition stocking the likes of Google Home and Amazon Echo could sacrifice its price lead.

Credit Suisse’s lead retail analyst Grant Saligari was one inquiring mind keen to know how Bunnings’ big digital push, both online and in store, was influencing its cost and profit lines.

“One of the things we've noticed is a lot more price changes coming through the Bunnings business as you're entering the technology categories, and some of the broader categories, forcing you to defend your lowest price,” observed Saligari.

“So you've removed, or you're in the process of removing ‘lowest prices are just the beginning’ from your signage, and there's some industry commentators suggesting that you'll struggle to sustain the lowest price guarantee, what's your view on that?” Saligari continued.

It’s a fair question too, given some of the deep discounting clickbait stunts pulled by the likes of Kogan and other e-tailers.

But the response from Australia’s tradie-in-chief was swift and unequivocal.

“Look, we changed a little bit of marketing creative,” Schneider grumbled before biting back.

“I think the commentary, that's being made around our ability to defend and our commitment to our prices is incredibly ill-informed”.

Even so, Schneider conceded tech can be a moveable feat in terms of pricing which, unlike cement, has been broadly deflationary.

“We're passionate about the customer and we're passionate about price,  so we drive the policy of lowest prices really hard. There are some categories that have a little bit more volatility and ...smart home is one of those, as is probably the broader tech space,” Schneider said.

“It's really about making sure that we're doing all the things now so that we that have a fantastic Bunnings business set up for five and ten years down the track.”

Bunnings in five years could be a very different store, and things are changing fast in its new online forays, and in more ways than one.

It’s essentially an aggregated reseller site, where a gaggle of trusted suppliers to Wesfarmers’ other retail businesses (Target, Kmart) as well as prestige brands like Royal Doulton and Sheridan get tp parade their wares to Bunnings’.

Aside from all the stuff Bunnings doesn’t want to really stock, like soft furnishings, tablecloths and kitchenware MarketLink is a ready-made referral factory for the +40 million online visitors per quarter that bounce around Bunnings’ main site.

And if you dig around MarketLink you’ll also notice that (now here’s a coincidence) that Catch, the online retailer founded by sibling serial digital investors Gabby and Hezi Leibovich as a deal of the day site, features prominently.

Wesfarmers forked out $230 million for Catch as a digital bulwark for cut price ‘kool mom’ fave Kmart and its risk free fashion failure Target, so there’s clearly a ready made audience for what to click ... or flick.

Aside from Catch there’s the likes of Klika and something called ‘Frank Hudson’ that will do you a poo-brown nouveau Scandi chic repro “Datsun Vintage Brown Leather Armchair” made from an unspecified timber for the modest price of $1599.99.

No, we didn’t misplace the decimal point, and yes, that’s more than original retro Scandi Chic goes for in Surry Hills. (And, yeah, Nissan will be thrilled their retired brand is making a comeback.)

But that’s not really the point.

Look on the bright side.

If you’re fed up with Apple Muzak and Spotify you can still buy an mbeat® Wooden Style USB Turntable Recorder for $99.95 with a “Classic and low profile wooden design” plus “built-in speakers, USB host & RCA output”.
Bunnings selling record players and Scandi Chic; Grant Saligari might just be onto something.