Broke NT Police thinks outside the box to access tech 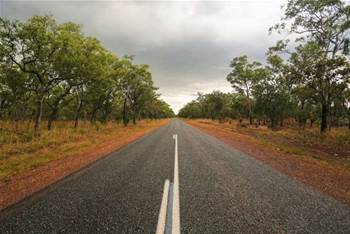 The Northern Territory and NSW Police have joined forces to allow the cash-strapped territory to piggyback off the work the premier state has done on body-worn video cameras.

He kits out the 1200-strong force on an oily-rag budget of less than $10 million, in a territory with only 12 percent communications coverage when both radio and mobile reach is combined.

“I visited our southern-most station and they showed me this shiny new radio installed in their car,” he told the audience.

But six months into his time heading the NT’s police technology unit, Labou has already started to embrace unconventional ways of getting things done.

He has begun talks with the NSW police force - 12 times the size of the NT Police - about leveraging their work rolling out body-worn cameras and potentially even piggybacking off their back-end support contract.

“In a nirvana sense we would essentially become a few more stations hanging off the NSW police force,” he said.

“They’ve got contracts in place. They can just pretend they opened some watchouses up in the territory."

He said talks were still in early stages and legislative and business process issues would need to be worked through, but said the prospects were promising.

“They’ve already learnt the hard way so I don’t have to."

Labou said the most likely outcome at this stage was that the pair would share infrastructure and contracts but store data within different repositories, to get around differences in their respective privacy laws.

He said the NT Police was also having a serious look at South Australia’s new facial recognition system.

His borrowing, begging and recycling approach to IT also extends to his own government, where he is meeting with officials in the transport department about borrowing its car registration system to register firearms.

“What do I do with cars? I register all different kinds of cars. The registrations have to be managed and renewed. If the car moves I need to tell somewhere. Drivers have to be licenced and can have different types of licences," he said.

“Replace car with firearm and that suddenly meets my spec. It could save me millions of dollars and years of time."