British government to binge on broadband for all 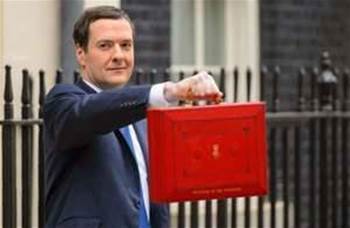 Chancellor of the Exchequer George Osborne holding the traditional Red Box with the government budget for 2015.

Among the pledges is the provision of 100 megabit per second broadband to nearly all premises in Britain.

The promised speeds represent an increase on the current government broadband delivery program target of providing "superfast" broadband with at least 24Mbps to 95 percent of the country by 2017.

Taxpayers have invested £1.7 billion (A$3.3 billion) in the project through central and local authorities so far, with the private sector matching the spend.

Most of the money has been spent on incumbent BT deploying fibre to the cabinet/node broadband, providing up to 80Mbps download speed VDSL2.

BT is also trialling G.Fast for for speeds over 100Mbps over copper broadband.

The British government also mulled changes to the legally binding universal service obligation (USO) for telecommunications providers, which would require them to provide at least 5Mbps downloads to all customers in Britain.

The broadband USO would also apply in rural areas, and provide subsidies for satellite services to deliver it.

The government has also promised up to £600 million (A$1.15 billion) will be spent to free up 700MHz spectrum, currently used by television broadcasters.

It wants the 700MHz frequencies to be used for 4G LTE mobile communications, and will pay broadcasters to reconfigure their transmitters to lower frequencies.