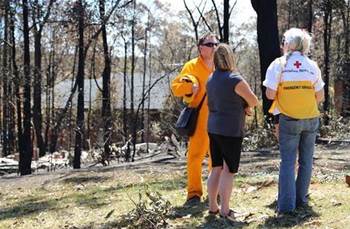 The Australian Red Cross is being targeted by bots that have so far made almost 900 fraudulent applications for financial assistance from a $216 million bushfire relief fund.

“[This is] what we call bot applications, and the latest number I've seen is close to 900 of those received,” he said.

“They're electronically generated [applications for assistance].”

Clement said an additional “very large number of applications” for financial assistance had been flagged either as suspicious or difficult to verify the detail of.

Applications that had proven fraudulent were being referred to police, he said.

“Where applications are suspicious we continue to work through those with applicants,” he said.

“Where we identify that there is fraudulent intent we are referring those to police ... but we intend to go back through more of those [suspicious] applications to determine if more of them should be referred.”

The Australian Red Cross raised a total of $216 million in donations for the victims of devastating bushfires over the summer of 2019-20, of which $83 million has so far been distributed.

Distribution is “very much done based on requests for assistance,” Clement said.

“We reached out to all of those communities. We [also] respond to people who've sought assistance so that is on the basis of applications that have come to us or that we've supported.”

One of the challenges with distribution is that it is difficult to verify whether applications for relief are genuine or not, because there is no central register or agency in each state that made a list - for example - of addresses with property damage.

That appeared to make the Red Cross a target for fraud activity, hence the bots that have been detected filing reams of false claims.

“Our main challenges in distribution have firstly been identifying people who've been impacted,” Clement said.

“There's been no single or shared list that we've been able to access that indicates to us particularly those greatly impacted, such as those whose homes were destroyed and damaged.

“One of the most significant challenges for us has been lack of access to good information to be able to verify that the people we are paying are those who've been impacted, particularly around things like destruction of property, and trying to minimise the impact on people through that verification process.”

Clement said the Red Cross was also challenged to ensure support was available in short, medium and long-term horizons, in keeping with the usual way disaster response unfolded.

“We know that disaster recovery is long term and we know that people need support at different stages in the short, medium and longer term,” he said.

“We know we need to work at the pace that people are ready to seek support. So we're trying to work at that pace to make sure the support is available.”